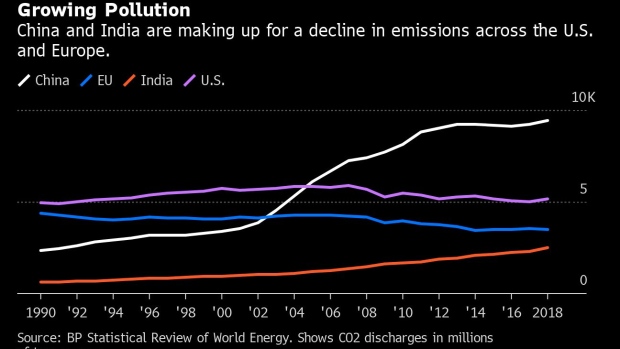 (Bloomberg) -- There are energy and environment ministers from almost 200 countries at the COP25 climate meeting in Madrid this week, and they share one common language: the jargon of carbon diplomacy.

This tongue mixes United Nations terms of art with technical shorthand absorbed from the energy industry. The result is among the most complex lexicons in use by any international institution -- a vocabulary that scarcely existed two decades ago.

It allows more than 15,000 delegates at COP25 to invoke past treaties and conduct minute deliberations on the mechanics of pollution credits.

For outsiders, even those with an intense interest in climate change, there’s little that’s familiar. What follows is a guide to a few of the most-used buzzwords.

Differentiation: This is one of the principles of the 1992 convention that set up the UN climate talks and one of the main friction points. It holds that industrial and developing nations shouldn’t have the same obligations because the poorer countries aren’t as rich and need to focus resources on alleviating poverty.

CBDR: Common but differentiated responsibilities. This wording from the original climate treaty embeds the principle of differentiation in the talks. The U.S. and Europe are concerned that China and India hide behind CBDR to limit the action they must take against global warming. The developing nations want to strengthen CBDR in all parts of the discussion. To them, it’s only fair to let them enjoy what richer countries have built up.

Loss and Damage: A mechanism envoys are talking about that would compensate developing nations for costs they incur from climate-related events. Those might include include extreme weather, rising sea levels and extended periods of drought. Developing countries see it as essential. Industrial nations worry they’re being asked to write a blank check for aid payments.

Mitigation and adaptation: Two of the main goals of these talks. Mitigation is any effort to cut or prevent emissions from hitting the atmosphere. Adaptation is about about coping with climate change, such as building walls to restrain rising seas and making cities more resilient in the face of extreme weather.

Just Transition:  New this year. Pressure groups are anxious that the wrenching changes required to slash fossil fuel emissions don’t hit the poorest. They want to see a transition that helps those affected adjust. The emphasis seems to be on helping poor nations, not necessarily coal miners in rich countries.

SDG: The UN sustainable development goals. They’re increasingly coloring everything in the climate talks. Agreed in 2015, these 17 targets everything from alleviating poverty and hunger to cleaning up water and ensuring gender equity. Climate is only a part of them.

SDM:  Sustainable Development Mechanism. This is the main instrument meant to emerge from the Madrid talks, a way to channel aid to projects that meet the UN SDMs. The first word in the name suggests this is much broader than previous measures that focused on climate.

Article 6: This section of the 2015 Paris Agreement that that countries should be able to use market mechanisms to meet emissions pledges. That suggests if one country makes deeper reductions than it has promised, it can transfer those savings to another nation. That might mean global carbon markets. Or it could be a more limited mechanisms that mainly to channel aid for projects that help poor nations cut emissions.

CDM : The Clean Development Mechanism. This early form of carbon allowance emerged from the Kyoto Protocol in 1997. It led to more than 8,000 projects and fed more than $138 billion into into lowering greenhouse gas emissions in developing nations. There’s more than 2 billion CDM credits, each representing 1 ton of carbon dioxide emissions. They peaked in value at more than 21 euros ($23) each in 2008. Then they plunged to about 17 cents after the European Union quit accepting them for compliance in its Emissions Trading System. Reviving the CDM is one sticking point in Madrid.

UNFCCC: The UN Framework Convention on Climate Change, a 1992 treaty that established the annual talks on global warming. It’s often referred to as “the Convention.” The U.S. under President George H.W. Bush was the first industrial country to ratify it. Under that deal, 196 countries acknowledged global warming was probably happening, that rich countries caused the problem and should extend finance and technology to developing nations to fix it.

COP25: The 25th Conference of the Parties to the Framework Convention on Climate Change. This is the gathering that is happening in Madrid from Dec. 2-13. It’s ambition is to elaborate on previous deals, especially the Paris Agreement.

Paris Agreement: The 2015 deal where all nations under the Convention pledged to reduce fossil-fuel emissions and work toward limiting temperature increases to well below 2 degrees Celsius (3.6 degrees Fahrenheit). The innovation of this deal is that all nations rich and poor alike agreed to make reductions and to deliver more ambitious pledges over time.

Kyoto Protocol: A 1997 treaty that called on 37 industrial nations plus the European Union to cut emissions on average 5% from 1990 levels by 2012. No obligations were placed on developing countries, which under the Convention didn’t include China or India.

G77: A group of about 135 developing countries including China. They negotiate as a bloc to get leverage over industrial nations. The state of Palestine is the chair of the group in 2019.

AOSIS: The Alliance of Small Island States, a group of 39 countries and five observer nations that has an outsized voice at the UN talks. Key members include Maldives, Bahamas, Nauru, Papua New Guinea and the Marshall Islands, all places that may be swamped by rising sea levels. Belize has the chair this year and is calling for rich nations to start putting their hands in their pockets to pay for the damage that comes with climate change.READ MORE:

To contact the editor responsible for this story: Aaron Rutkoff at arutkoff@bloomberg.net