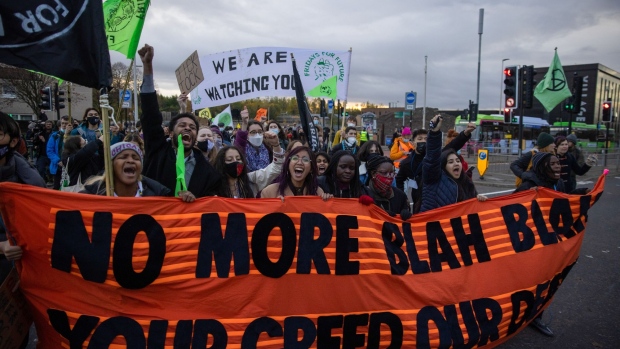 A Fridays for Future protest at Festival Park during the COP26 climate talks in Glasgow, U.K., on Monday, Nov. 1, 2021. Climate negotiators at the COP26 summit were banking on the world’s most powerful leaders to give them a boost before they embark on two weeks of fraught discussions over who should do what to slow the rise in global temperatures. , Bloomberg

After six years of writing about all things climate change, I’ve come to see my beat as covering both real and false solutions. That might actually be a sign of progress.

False solutions to cutting planet-warming carbon emissions aren’t new. But the number of people hawking those answers, and the money being spent on them, has grown substantially in the last few years.

The world’s 10 largest economies now have a goal to reach net-zero emissions within decades. It’s a big business opportunity that’s prompted all kinds of people to finally pay attention to the climate problem. It’s no longer just cranks emailing about a perpetual-motion machine they invented in their garage. Journalists regularly get press releases talking up everything from how multinational corporations are solving the climate crisis by encouraging recycling to claiming their products are “sustainably sourced” when they aren’t.

Sometimes the greenwashing oozes from these solutions, but often it’s hidden through sophisticated tricks. As we start a new year, here are some quick ways to test whether a climate solution is worth paying attention to.

Smells like greenwashing? Some solutions are framed as a band aid that’s needed before the real solution arrives. Carbon offsets fall into this category. Done properly, the credits may prove to be a way to erase a tiny sliver of global greenhouse gas emissions. That potential, however, is often stretched beyond plausibility to justify much more dangerous ongoing pollution.

Found the silver bullet? Sadly, climate change won’t be solved by killing werewolves. That doesn’t stop many from declaring that, say, if only the world could adopt carbon taxes or fund the development of nuclear fusion, we’d stop warming the planet. Always be wary of someone claiming to have the one and only answer to such a multifaceted problem.

Is it too good to be true? That old saying stands the test of time. It’s not to say that wacky ideas aren’t welcome. But they need to prove applicable outside a laboratory. Consider the story of Global Thermostat, a U.S.-based startup that promised to build machines that could suck carbon dioxide from the air very cheaply, but has almost nothing to show after a decade.

Is it just marketing? Ideas often gain credibility when people you trust support them. That’s not always enough. Just look at the growing sums of money going toward ESG funds that support companies supposedly tackling environmental, social, and governance issues. The reality is that sustainable investing is really about sustaining bottom lines, not the planet.

How will government policies be implemented? Not all measures work as advertised. Some backfire, and spectacularly so.

What are the knock-on effects? The clamor for climate solutions is coming from many parts of society. The sale of a company, for example, may help take some carbon emissions off one balance sheet, but inadvertently end up increasing overall emissions.

This is not an exhaustive list, but it gives you an idea of how to weed out some bad solutions. As companies and governments come under more pressure to disclose their emissions, it’s slowly becoming easier to keep track how they’re doing. Ultimately the question remains: are their emissions dropping as quickly as the science demands?