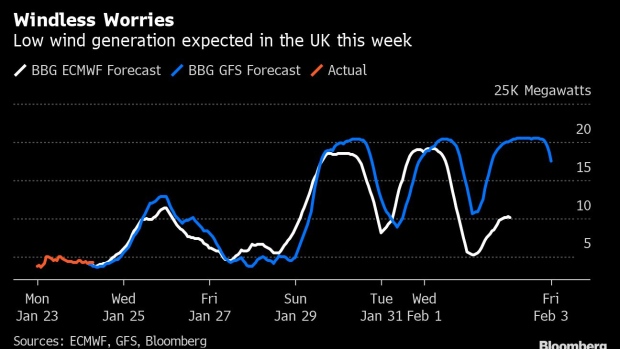 (Bloomberg) -- Britain is paying some consumers to reduce their energy use as a blast of cold weather and weak wind put supplies under pressure.

More than 1 million households and businesses have signed up to a program started by National Grid Plc that is expected to cost £3.5 million ($4.3 million) over two days. Monday was the first time the program went live after trials over the past two months, and a second round is scheduled for Tuesday. Cutting demand during the evening peak will help balance the electricity grid and keep the lights on.

Here’s how the service works and who will be eligible to save money.

Who can take part?

Households and businesses supplied by one of the 27 companies approved for the program. Having a smart meter installed is essential to qualify for the Demand Flexibility Service. The big players including Centrica Plc’s British Gas, Drax Group Plc, and Octopus Energy Ltd. are all taking part.

How does it work?

Customers will have been contacted by their energy suppliers beforehand to sign up for the service. Once National Grid decides when demand needs to be reduced, suppliers will notify participants, who will then have to confirm they will curb their energy use.

Homes that reduce their normal usage by not using appliances such as washing machines, dishwashers and ovens during the period will have the savings added to their bills. British Gas has urged consumers to charge electric vehicles during non-peak hours.

How much money can consumers make?

It depends on the energy supplier. National Grid said it would pay at least £3 per kilowatt-hour but suppliers could offer more.

Households that have signed up for Octopus Energy’s program were told they could make as much as £4 for each kilowatt-hour they save — roughly the equivalent of boiling water in a 1 liter kettle 10 times. British Gas has said that its customers will earn at least £1 for every day that they take part.

Why is it needed?

Weak wind has curbed power supply just as cold weather increases demand for heating. National Grid is already operating the power system with the tightest margins for years, and is turning to tools like keeping coal power stations in reserve to help boost supplies if needed.

The crunch point is between 5pm and 6pm, when usage generally surges.

Could it change long-term energy habits?

Research firm NTT Data says it’s possible, with a survey showing 94% of consumers would be happy to change their habits during peak demand hours if it saved them at least £26 per month.

Governments across Europe have continued to hammer home the importance of reducing demand. Consumer behavior in balancing the energy system will be “a very strong feature” as the UK moves toward a renewable-based system where supply can be intermittent, according to Adair Turner, chair of the Energy Transitions Commission.

“So what we will end up with is a system in which we will have to increasingly encourage people through the price mechanism to think about when they use electricity as well as how much they use,” he said in an interview with Bloomberg Radio. “And I think this is the first step in that direction.”

--With assistance from Rachel Morison.