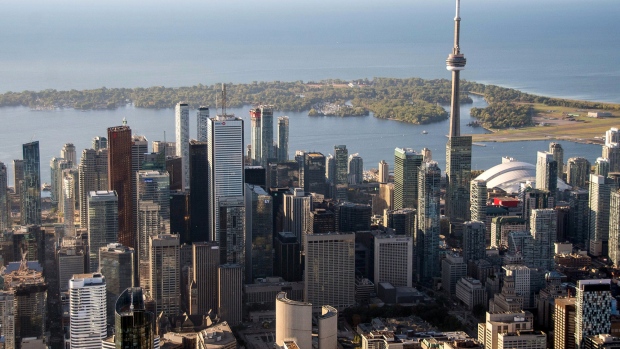 The CN Tower stands among buildings in the downtown skyline in this aerial photograph taken above Toronto, Ontario, Canada, on Monday, Oct. 2, 2017. , Bloomberg

Housing affordability is a major issue for many Ontarians getting set to cast their ballots in the provincial election.

The governing Liberals brought in measures last year that, along with higher interest rates and tighter mortgage lending regulations, led to a modest cooling in home pricing and activity after the market reached dizzying heights. But average home prices and rents in Ontario are still above national averages, and costs in Toronto remain high. The Canadian Press looked at how some Ontarians have fared.

The Johnstons were living comfortably in their three-bedroom townhouse in Toronto, but the lifestyle in the city was expensive. Although the home they owned had appreciated significantly over the years, that was money on paper, not in their pockets.

"We couldn't retire there. All the money was tied up in our house," said Trudi Johnston.

The pair sold their home for roughly $900,000 and moved to a slightly larger home in the resort town of Wasaga Beach that cost roughly $400,000.

They couldn't have timed it better -- they sold their home in early April 2017, just before the Ontario government handed down measures to cool down the market. Dennis Johnston retired last May from the construction industry, while his wife continues to work as a Toronto realtor, driving back into the core when necessary.

The Johnstons are among the many older couples moving out of the big cities in search of more budget-friendly options upon retirement age. Rental rates for senior housing in Ontario are the highest in the country at $3,526 month, according to a May report on the Canadian senior housing dilemma by ratings agency DBRS. "National average rent rates could reach just over $4,000 a month by 2025. Keeping up with this rate will become increasingly difficult, especially for those on a fixed income."

Name: Luke Genik
Age: 32
Location: Toronto
Profession: Production co-ordinator in the film industry
Hometown: Toronto
Status: Bought a semi-detached triplex in Toronto in 2016, lives in the basement while renting the other units

Genik had been looking to buy a house in the east end of Toronto near where he grew up, but realized that even though he was lucky to have help from his parents for the down payment, it would be tough to afford ongoing housing costs as a single person.

"I could be house poor, spending $2,000 on mortgage, then paying all the property tax, and garbage, and water, and electrical all by myself. It would be somewhere in the range of $3,000, on my own."

Instead, Genik bought a semi-detached triplex in August 2016, gutted and renovated it over the course of three months. Now, he rents out the top two units to help cover the mortgage costs, while living in the basement unit. It's a creative solution to the worsening housing affordability problem in Toronto, where the cost of real estate and rental rates are among the highest in the country.

"I work in an industry where we make very good money, and a lot of my peers who are of similar age older, they can't afford to buy... or they're buying a shoebox," he said.

A recent study by the Toronto Region Board of Trade suggested that 65 per cent of young professionals said high housing costs made it hard to pay off debt. Even as home sales slowed this year, the average price of a house in Toronto in April was $804,584, according to the Canadian Real Estate Association.

Desforges and Iwasa-Madge's one bedroom apartment in Toronto's Greektown no longer provided enough space after their daughter was born three years ago. The trio then rented a three-bedroom townhome north of the downtown core for $3,000, which gave them extra space and a backyard. But the location left them feeling isolated.

"We sort of had to live in the middle of nowhere in order to continue living in Toronto," Desforges said.

In April, they chose to move to Hamilton, where they could get more bang for their rental buck. They now live in a two-bedroom apartment in an old Victorian home for $1,800 a month.

A move out of the big city is an increasingly attractive option for Ontario renters, as costs continue to rise and vacancy rates drop.

In the fall of 2017, Ontario rental vacancy rates slipped to 1.6 per cent -- the lowest level since 2000 -- from 2.1 per cent a year earlier, according to the Canada Mortgage Housing Corporation. In turn, the average rental rate for a two-bedroom unit in Ontario rose to $1,208, up from $1,154 the previous year.

A two bedroom unit in Hamilton, however, was just $1,103, compared to $1,404 in Toronto. Desforges now runs creative writing workshops in Hamilton while also staying home with their daughter. Iwasa-Madge, who co-founded the startup Brainsights, splits his weeks between working from home for a couple of days and commuting to the office on others.

Not only are rental costs more reasonable in Hamilton, the option to own a home is now within reach for the family. "We never considered the possibility of being able to own a home when we were living in Toronto," said Desforges. "Now that we're here, we could actually buy a house in couple of years."

Fulton and Shaughnessy, want to upsize from their rented one-bedroom-plus den condo in Toronto to a larger home of their own, but they have already been outbid on five different homes since October.

The engaged couple are looking for a three-bedroom to have the option of expanding their family down the line. But because renting has become so pricey in the city, rent on a home in a neighbourhood they want to live in would cost them roughly $3,000 a month, she estimates. Monthly payments on a mortgage would be on par, she said. Having previously commuted for two years from Alliston, moving outside of the core is not an option they want to consider.

The pace of housing activity has slowed down and the average selling price of a home in Toronto in April fell 12.4 per cent year-over-year to $804,584, according to CREA. But the cost is still out of reach for many.

For an additional $50,000 and an hour-and-a-half drive, the Stitts upgraded last fall from a one-bedroom-plus den condo in Toronto's west end to a three-bedroom backsplit with a backyard in Niagara Falls.

After their son Michael was born in 2016, the family needed more space, but buying a house nearby was too expensive an endeavour.

"Homes in that area were beyond what we were going to be able to consider," said Erin Stitt.

She started researching real estate options in various areas of Ontario where they had family connections, including the Scarborough suburb of Toronto, and Kitchener-Waterloo. Niagara won out in the end because of how far their real estate dollar could stretch as well as lower daycare fees, she said.

In June, they sold their condo for roughly $425,000 and bought their Niagara home for $469,000. Stitt's husband's job as a industrial service technician involves a lot of travel, enabling them to move outside of the Toronto area. Stitt, who had worked as a marketing manager, started looking for employment in the Niagara area and took a job in communications at the regional realtors' association last month.

Escalating real estate prices in Ontario over the years have been pushing more young families to seek housing options further afield. A recent Toronto Region Board of Trade survey of young professionals found that 42 per cent said they were likely to leave because of high housing costs.

"Housing is consuming an ever-larger portion of family budgets, reducing residents ability to spend or save including for retirement," the board said.