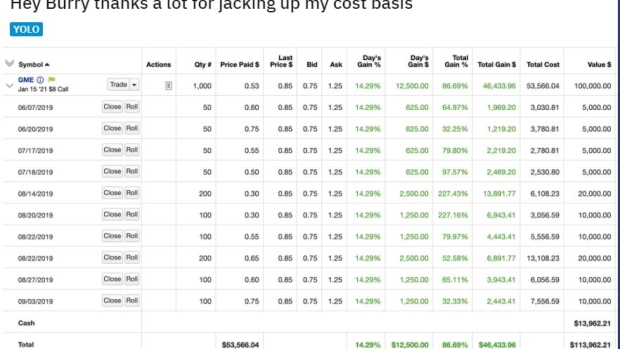 (Bloomberg) -- Short sellers have been called a lot of things. Bloodsuckers. Parasites. Other words not fit to print. Now in the vortex engulfing GameStop Corp., they have a new name: the establishment.

It’s a role cast for them with relish by their chat-room usurpers, the tens of thousands of average Joe day-traders whose fervor for a left-for-dead retailer has become a self-fulfilling prophecy in its 245% rally this year. GameStop has become a money geyser for the options-obsessed crowd that gathers in Reddit’s WallStreetBets forum. For those wagering on a decline, it’s been a catastrophe.

Give credit where it’s due. In their frenzy, WSB’s cocky hordes have managed to turn the tables in a game short sellers invented, spinning gold from the complacency of others. Before this year, GameStop was a cash register for bearish traders, who borrowed and sold more shares than the company issued. Hedge funds had been winning so long that they overlooked the tinderbox they were creating should sentiment turn.

Now it has, violently. GameStop, which isn’t expected to turn a profit before 2023, has seen its market value triple to $4.5 billion in three weeks, burning the skeptics whose any attempt to cover is likely to further propel its ascent.

A notable victim of the shift has been Citron Research’s Andrew Left, once Wall Street’s most celebrated iconoclast for his role hounding Bill Ackman out of another battleground stock, Valeant Pharmaceuticals, five years ago. Today, Left finds himself first among the hunted, his decision to stop publicly bashing GameStop helping drive it up as much as 78% on Friday.

“Price movement aside, I am most astounded by the thought process that goes in to making these decisions,” Left said in an email to Bloomberg News on Monday. “Any rational person knows this type of trading behavior is short lived.”

Last week, before his decision to go mute on GameStop, Left issued a plea to would-be buyers: “look at valuations,” which are by some measures stretched. Ironically, in tracing the history of WallStreetBets’ fascination with the stock, that’s exactly what the chat-room faithful said they were doing when they set out on their journey. Here’s the story of that uprising.

Twenty-two months ago, inklings of a bull case started showing up on WallStreetBets, the Reddit forum that has become synonymous with retail zeal in the pandemic age. With GameStop’s shares and profits both falling for years, a thread by user “delaneydi” said detractors were undervaluing the retailer’s cash, with which the shares were deceptively cheap.

“My thesis is not contingent on a turnaround or business expansion, this is solely a deep value play,” wrote delaneydi. “Even if we assume double-digit top line sales declines and gross margin contraction, the companies valuation does not reflect the current earnings power, especially when considering the companies large cash horde.” (WSB posters are not distinguished by their spelling or punctuation.)

The view fell mostly on deaf ears as the shares continued to tank and enrich bears. GameStop fell 15% in April of that year, 12% in May, 28% in June and 27% in July. Yet two things happened around that time to lay the foundation for the events of this month.

One was Michael Burry –- of Big Short fame and the veritable spirit animal for internet stock gurus hoping to hit the big time –- saying he was long the shares through his fund Scion Asset Management.

Second was the surfacing of an idea, first in jest, that eventually evolved into the blueprint for the crowd-sourced short squeeze that has blown up in January. Could GameStop fall so far as to make a takeover possible -- by WallStreetBets itself?

The stock closed at $5.04 that day, but after a 36% plunge from the day prior anything seemed possible for one of Wall Street’s most hated stocks. The notion was met with derision and sarcastic suggestions typical of WSB’s usually juvenile ambiance, but the genie was out of the bottle. What if the renegades could gang up to flood a single security?

Around this time, a Reddit handle surfaced that has become the de facto champion of the WSB bull case on GME, a user going by DeepF-----gValue -- name edited for content -- brandishing his “tendies.” (For the uninitiated, tendies are WallStreetBets slang for gains; the etymology of the word comes from chicken tenders, widely regarded as a dish suitable for kings and financial oligarchs.)Just three weeks after an Aug. 19, 2019, press release from Burry’s Scion urging GameStop to buy back $238 million in shares and a Seeking Alpha post warning about the dangers of shorting GameStop, the forum’s future hero showed the goods.

While the battle was far from won, DeepF-----gValue, who goes by Roaring Kitty on YouTube, became the first to show that there was money to be had in those empty aisles flanked by video game discs Wall Street analysts said no one needed to buy.

But the forum was still not adopting the position en masse.A value proposition was one thing, but there was no guarantee of success. The shares rallied from August 2019 through October, then went sideways until the end of the year before following the market down as the Covid-19 pandemic spread.

Another online watershed occurred when user “Senior_Hedgehog” alerted the YOLOing masses to the “biggest short squeeze of your entire life.” It was April 13, 2020, and, according to the elder Hedgehog, 84% of the retailer’s shares were held short. The final all-caps sentence imploring GameStop owners to call their brokers and tell them to not lend them short opened a new theater to wage war against short-sellers.

It’s a little known fact, and one that you wouldn’t expect to learn on a Reddit message board, that a stockholder can request that shares they own outright not be lent out to short-sellers.“To be clear, your brokerage firm cannot lend out your stocks without your permission,” according to a blog post from the Sonn Law Group on the topic. “However, you may have signed a customer agreement that explicitly allows your broker to lend out your securities. This clause is often tucked deep within the customer agreement, and few investors pay much attention to it.”

It was at that point that the value trade thesis and the idea of forming an unofficial cooperative to swarm the stock coalesced into what would eventually push the shares to the promised land: a chance to inflict pain against Wall Street. For a change.

Striking the first blow didn’t take long. Shares rallied 22% on the day of Senior_Hedgehog’s short squeeze post. The next day they soared by another 26%, the biggest gain in at least 18 years at that time, while volume was more than five times the 20-day average at one point during the day.

Doubters were still outspoken and the shares stabilized over the following months even as more posters made an appeal to the stock’s intrinsic value and GameStop’s importance to the gaming industry.

Then another break, maybe the biggest of them all. Ryan Cohen, co-founder of Chewy Inc., disclosed a 5.8 million-share stake in GameStop through his RC Ventures on Aug. 31 sending GameStop shares surging 24% on the day.

Cohen’s announcement was the tipping point. A visionary and a classic disruptor, Cohen’s Chewy was everything GameStop wasn’t: an internet juggernaut, nimble, and, perhaps most importantly, it had already served up plates full of tendies with a triple-digit year-to-date return at the time of Cohen’s holding going public.

The thought of going large on GameStop had made the shift from radical to sensible. There were still detractors, but with Cohen’s backing war was about to be waged against the establishment.

If there’s one post to read from WallStreetBets to explain how GameStop shares went from single digit prices in September to $65.01 in January it’s “Bankrupting Institutional Investors for Dummies, ft GameStop.”

In the Sept. 19, 2020 post, Player896 painted a clear fundamental case for why GameStop shares were approaching lift-off. And here was the kicker:

As shares began their steady rise during the last four months of 2020, more and more users joined the bandwagon. And as part of their welcome party they were reminded of the code of conduct: never sell, never surrender. Or in WallStreetBets parlance, only buy if you have diamond hands.Along the way WallStreetBets began calling out those on the other side of the trade.Gabe Plotkin’s Melvin Capital was the first to come under the microscope.

Plotkin represented the perfect foil: a pedigreed portfolio manager who set out on his own after managing money for legendary hedge-fund manager Steve Cohen. The failed bet on GameStop has dragged down returns at Melvin Capital. Its portfolio was said to be down 15% in the first three weeks of 2021, according to the Wall Street Journal.

The greatest ire was reserved for Left and Citron. His call that GameStop would fall back to $20 quickly on Jan. 19 touched a nerve. Shares closed at $39.36 that day, continuing a surge set off when Cohen was named to the board a week earlier.

This wasn’t the first time Left had attacked a WallStreetBets darling. His short play against Palantir Technologies Inc. and bearish call for Chinese carmaker Nio Inc., among others, had already made him persona non grata in the land of tendies.

The attacks on Left and Citron were too much for the hardened short-seller. He suspended a scheduled live stream aimed at explaining its position on GameStop because of “too many people hacking Citron twitter,” Citron said in a Jan. 21 tweet.

As unlikely as it may seem, the rise to $60 is just the beginning, if you buy into WallStreetBets thinking. The historic gains have, by at least one account, so far come without much help from the great short squeeze.

“There is a GameStop short squeeze, but no the squeeze is not the major force behind the price move,” Ihor Dusaniwsky, managing director of predictive analytics at S3 Partners, said by email on the day Cohen joined the board. “This is much like the chicken and egg question -- did long buying lead to short covering/squeeze or short covering/squeeze lead to long buying?”

Short interest was 139.67% of the float as of Jan. 21, more than double the next highest level of any stock in the Russell 3000 Index, according to data from S3 Partners.Of course, it also could all unravel at the first sign of mutiny within the ranks of the WallStreetBets pirates.

But if it does all come crashing down soon, don’t lose any sleep for DeepF-----gValue.

The WallStreetBets legend claims he rolled his initial $53,566.04 in GameStop call options into an $11.2 million paper fortune.