How XRApplied is capitalizing on the explosive growth of the XR technology market - BNN Bloomberg
{{ currentBoardShortName }}
Markets
As of: {{timeStamp.date}}
{{timeStamp.time}} 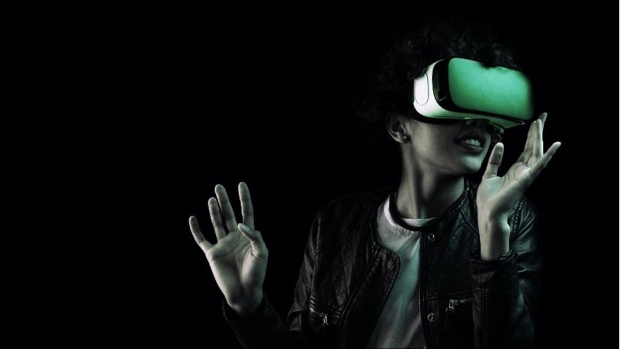 Remember on Star Trek how the Enterprise crew would enter the holodeck and immediately be surrounded by an immersive and interactive interface? With a distorted hum, a blank 4D canvas would populate, creating opportunities for mission training, academics, or gaming.

While there's never a formal announcement that the future has arrived, a good indicator is when the progress made to-date makes those old fantasies look well within reach.

You're about to find out how far beyond fantasy we've gone in the world of digital immersion and discover one company creating future technology and software that can be uploaded on any current hardware with XR capabilities — this is something that previous generations haven’t been able to do.

In recent years, XR went from being a futuristic buzz word to the commercial ready and revenue generating reality it is today. This is due to the perfect storm of huge investments over the last several years from the top 5 (Microsoft, Apple, Amazon, Meta and Alphabet) and an unexpected exponential growth and adoption period during COVID.

If you're unfamiliar with the shorthand, XR represents the overarching umbrella for all the variations of extended reality. These include:

Aside from all the exciting VR headset experiences and Pokémon Go AR mobile games, there are many business B2B2C use cases for this technology being implemented.

You might recall back in 2017 when IKEA created a mobile app which allowed their customers to visualize what furniture pieces looked like in their homes before making a purchase.

Here’s how the app works, according to TechCrunch:

The neat aspect about IKEA’s app is that the images are presented as 3D objects “complete with shading that responds to light in the given location that you have snapped and the texture of materials on the products.”

Experiences like this are quickly becoming the expectation and not the exception. It’s a world of innovation that has blossomed over the last few years, especially as noted earlier, with the onset of the global pandemic in late 2019, forcing many to “speed up the adoption of digital technology.”

Companies like Google, Apple, and Facebook have all entered the race to bring the next evolution of consumer XR smart glasses to market and XR solution-based company, XRApplied Technologies (CSE: XRA) is pushing that technology forward and expanding it with agnostic capabilities and content.

The possibilities of the medium

Company co-founders and directors, chairman Aleksey Andreychenko and COO Constantine Makeev, were already embedded in the world of IT innovation well before XRApplied began working on contracts with everyone from gaming companies to remote education brands.

As the president and co-founder of a leading Microsoft silver-rated development house out of Ukraine, Andreychenko has built a 350-person team with top talent from around the world. This keen skill of building remote teams has boosted XRApplied’s development power and has garnered crucial partnerships along the way.

However, before we get into the various strategic alliances the company has made, what does XRApplied do?

“We can create unique experiences for just about any industry. It's pretty much boundless.” — Jason Walsh, board advisor, XRApplied Technologies Inc.

The company specializes in bringing cost-efficient AR/VR e-commerce solutions to businesses large and small. They accomplish this through a suite of proprietary products and services (including AR catalogue, toy gamification, AR App e-commerce, AR/VR interactive games) that are brought to the masses via the company’s exclusive XRA marketing platform.

As Jason Walsh, capital market specialist and advisor to XRApplied's Board, puts it, "Whether in health and wellness, architecture, or gaming, we can create unique experiences for just about any industry. It's pretty much boundless.”

There is a great deal of room to grow in the XR space, specifically when it comes to smart glasses and VR, that the possibilities for development are rivalling that of smartphones, especially due to the increasing adoption of 5G networks.

For instance, you couldn’t build out an extensive and safe training regimen for firefighters without VR. Now emergency workers can prepare for intense scenarios repeatedly without ever being in danger.

XRApplied is tapping into a fruitful extended reality market currently valued at US $26.05 billion, with the potential to reach US $463.7 billion by 2026. This year alone, eMarketer expects “58.9 million people to use VR and 93.3 million to use AR at least once per month in the U.S.'' For reference, “these numbers represent 17.7 per cent and 28.1 per cent of the U.S. population, respectively.”

The XR market certainly puts XRApplied in an enviable position of being able to take advantage of growth trends and capitalize on the opportunity for AR, VR and MR to go mainstream.

On the company’s revenue side, XRApplied raised $1.2 million in capital by way of a non-brokered private placement and has built an impressive catalogue of assets, along with recently listing on the CSE under stock ticker $XRA.

The company also announced the signing of a partnership with Hollywood Creative Academy (HCA) by way of a revenue share agreement. It works like this:

Another key profit avenue for the company is their revenue share deal with Haibu, an entertainment franchise of books, TV shows, films, and games invoking thought and positive change (with environmental sustainability, animal protection and young women empowerment). (XRA is handling AR/VR and marketing).

Building out an XR division by creating infinite experiences

As an example of their prowess in the gaming space, XRApplied has developed an educational children's AR app called Balloon Pop (imagine Pokémon Go, but you're a marksman popping inflatable targets that teach children to read) that just launched version 2.0.

With their XRA flooring app (version 2.0 set to release soon), clients can get a digital overlay of their flooring possibilities superimposed over top of their home or workspace. It's an impressive system that grants buyers the confidence of seeing renovation results immediately.

The company also has their own news app (available in iOS & Android App store), XRA News, which acts as an aggregator of XR current events and trends and is a means to give exposure to upcoming releases.

It's no wonder that the largest tech companies are investing billions to develop their XR hardware divisions. The VR headset market size alone grew over 50 per cent in Q1 2021, compared to the same period in 2020. Facebook, which owns the Oculus headset brand, is seen as one of the major contributing factors to this growth, according to The Journal.

This brings us to another revenue stream for XRApplied: identifying under-optimized games and apps that have been well developed but not adequately optimized or monetized.

"Oftentimes, game and app developers run out of money, or just don't have the marketing experience to push their product," says Matt Coleman, board advisor and founder of Magnify.  "Whereas we are experts at that, and there are thousands of games like this out there."

It's a model that can take several routes to monetization: a rev share deal, a straight partnership, or an outright acquisition of the distressed assets. XRA can then launch and publish new assets, which they have a handful of that are almost ready to relaunch, with their brand name on them.

XRApplied recently acquired, reskinned and will relaunch a multi shooter game that is estimated to be worth $1.5 million as opposed to the company’s $200,000. investment.

"It all happens at a rapid pace. A lot of these games take anywhere from 6 to 24 months to develop," Coleman adds.

A strong future ahead of XRApplied

This momentum in key profit avenues has led XRApplied to build its network of partnerships as well. Coupled with the company’s industry resources, XRA has the ultimate toolkit.

This toolkit involves custom solutions for implementing sustainable options tailored to a specific company (and paying customers); scalable technologies to build XR solutions and leverage technologies in games and apps.

Not only do they have the experience and development support but their partnership with marketing pioneer Mobcast also affords them leading edge technology, not of machine learning but machine teaching. Whereas if AI has learned the wrong technique, it will recognize the error and correct or "re-teach" itself.

The company’s revenue model is propelling the company towards success; here is a summary of their three-prong approach:

There are numerous things to consider when looking at the early success of XRA. While the possibilities of the future seem to have far surpassed our expectations of what technology could be, XRApplied is ready to accommodate all outcomes.

To learn more about XRApplied, visit their website here.

Follow XRApplied for the latest news on social media: