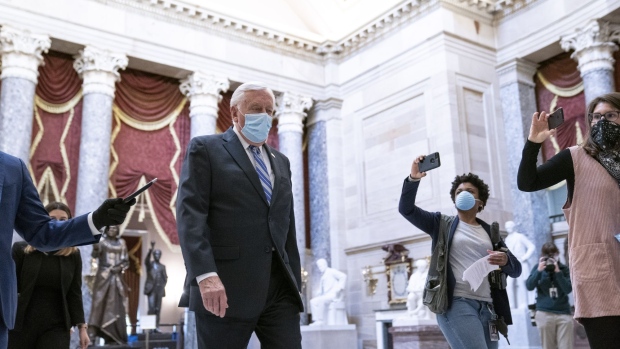 The House is poised to pass a bill on Thursday that would extend the current eight-week period during which businesses must use funds to have loans forgiven to 24 weeks or Dec. 31, whichever comes sooner. It would let businesses repay loans over five years instead of two, and scrap a rule that no more than 25% of proceeds can be spent on expenses. The House also plans to take up a bill to increase transparency in the program.

A similar measure with bipartisan support in the Senate would extend the deadline to apply for a loan to the end of the year from June 30 and double the current eight-week period during which businesses must use funds to have loans forgiven.

“What we think is there is a general consensus -- both House and the Senate -- that the time frame that was set was too short, unfortunately,” Hoyer told reporters.

The timing matters because the first companies that received loans after the PPP program opened on April 3 will see the eight-week loan-forgiveness periods begin to expire at the end of this week and in early June.

Senate leaders have asked lawmakers in the chamber to give unanimous consent to the Senate’s version, which would also allow borrowers to use proceeds for personal protective equipment and investments for reopening while ensuring that lenders aren’t held liable for the certification and documentation borrowers provide during the loan process.

Senators aren’t in town this week, but have a pro forma session scheduled for Thursday, during which it would pass the bill if there are no objections. Otherwise, the Senate could take up the House-passed measure next week.

A Senate GOP aide said action in the Senate is being held up because some senators want to attach other provisions to the legislation and may try to do the same with the House bill once it comes over. Senate leaders have some hope the deadline for businesses under the existing law will create a sense of urgency that would end those efforts, according to the aide, who spoke on condition of anonymity to discuss internal deliberations.

Hoyer said that he thought the differences in the measures could be easily reconciled.

“There’s not much difference in terms of the weeks -- eight weeks,” he said.

After the initial round of $349 billion in funding for PPP was exhausted in just 13 days on April 16, there were concerns that the second tranche of $320 billion would also be depleted in a matter of days when the program relaunched on April 27.But the pace of loan approvals has slowed dramatically, and there’s still more than $100 billion remaining in the second round of funding, based on totals the Small Business Administration released through May 23.

In fact, the net amount of loan dollars approved has declined with new approvals being offset by cancellations, especially from businesses returning loans. The net amount of loan approvals was $511.2 billion through May 23, about $2 billion less than the $513.3 billion processed through May 16 -– even as the net number of loans increased by about 85,000 during that time, according to SBA reports. The net amount has declined by about $20 billion since May 8, according to calculations by Bloomberg News.