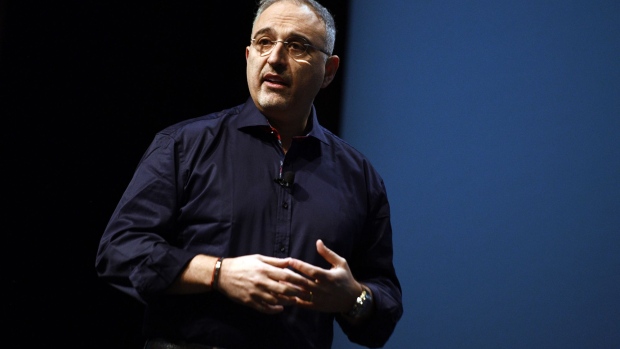 Antonio Neri, president and chief executive officer of Hewitt Packerd Enterprise (HPE), speaks during the HPE Discovery CIO Summit in Las Vegas, Nevada, U.S., on Tuesday, June 19, 2018. The summit brings together experts and industry leaders to explore the critical elements CIO's must address to enable speed and agility, including people, use of data and approaches to security, governance and control. , Bloomberg

Sales will be about $7.4 billion in the fiscal first quarter ending in January, compared with analysts’ average estimate of $7 billion, according to data compiled by Bloomberg. Profit, excluding some items, will be about 54 cents a share. Analysts projected 49 cents.

HPE’s pivot away from traditional hardware to services such as cloud computing and artificial intelligence is paying off, Chief Executive Officer Antonio Neri said in an interview. “We exited fiscal 2022 with steady demand,” he said.

In the fiscal fourth quarter, which ended Oct. 31, revenue increased 7% to $7.87 billion, the Spring, Texas-based company said Tuesday in a statement. Analysts, on average, projected $7.37 billion. Profit, excluding some items, was 57 cents a share, a penny higher than estimates.

Sales in the Intelligent Edge unit gained 18%. The division, which is a key part of HPE’s transformation plan, covers products that let companies gather and process data where it is generated instead of sending it to an external storage center. Revenue from the company’s largest division, Compute, which includes data centers and servers, jumped 16%. Both exceeded analysts’ expectations.

However, sales in the segment including high-performance computing and AI declined 14% in the quarter, while analysts expected a revenue gain. The decline was due to one large contract with the US Department of Energy for the Frontier supercomputer that was pushed back to the current quarter, Neri said.

The shares gained about 3% in extended trading after closing at $15.46 in New York. The stock has been a relative safe haven in technology this year, dropping only about 2% compared with a 26% decline for the S&P 500 Information Technology Sector Index.

HPE also affirmed its earlier full fiscal year guidance of adjusted earnings per share of as much as $2.04 and free cash flow as high as $2.1 billion. It also said it would spend at least $500 million on share buybacks in the fiscal year.

HPE’s decision to keep its previous guidance may be prudent, as peers such as NetApp Inc. have reduced their outlooks, said Bloomberg Intelligence analyst Woo Jin Ho. The results are also rosier than those of office infrastructure peer Dell Technologies Inc., he said.

Neri said it’s “a little too early” to think about updating the full-year guidance, as supply chains and currency fluctuations continue to provide headwinds. He added that the company doesn’t have any job cuts planned. “No restructures -- we’re done with that.”

(Updates with additional comments from CEO in the final paragraph.)