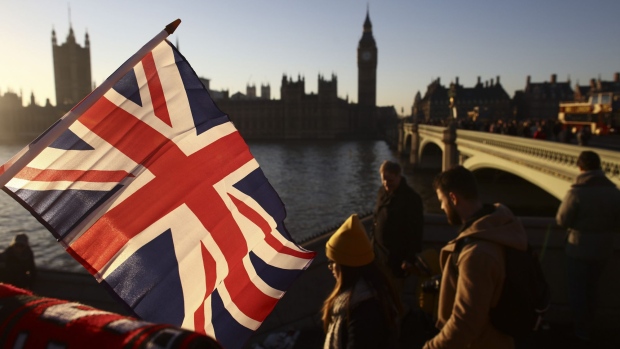 Tourists walk past a souvenir stall selling British Union flags beside Westminster Bridge on the River Thames in view of the Houses of Parliament in London, U.K., on Thursday, Dec. 29, 2016. Demand for luxury brands in the U.K. is flourishing, boosted by increased tourism and spending linked to the weaker pound. , Bloomberg

HSBC Holdings Plc Chief Executive Officer Noel Quinn said the UK had regained its economic credibility following a disastrous budget that led to a spike in borrowing costs and a crash in the value of the pound.

Quinn said the new British government had recovered the country’s standing in international markets after a “very difficult period of time” and credited the actions taken by the current Conservative administration of Prime Minister Rishi Sunak.

“I think the confidence has come back into the appropriate balance between fiscal and monetary policy,” said Quinn, speaking at the Financial Times Global Banking Summit in London.

“I think it was a very challenging few weeks, but we have moved on from that and I think we’re much more stable, and the UK is still very investable, in my opinion,” he said.

His comments come after Charlie Nunn, who leads rival Lloyds Banking Group Plc, said on Tuesday there was still “nervousness” among global investors in the wake of unfunded budget measures unveiled in September that led to the downfall of Liz Truss’s government.

While London-based HSBC makes most of its money in Asia, the UK is its second largest market after Hong Kong. The bank is one of the largest financial services employers in the UK and is one of only a handful of listed British companies with a market capitalization of more than $100 billion.

Much of Quinn’s year has been spent fighting a campaign by HSBC’s largest shareholder, Ping An Insurance Group Co. of China, which has said the bank should split off its Asian operations into a separate unit.

HSBC has rebuffed Ping An’s arguments for a breakup, but Quinn said the bank and its adviers had given “very serious consideration” to Ping An’s proposals before rejecting them. Quinn added that despite speculation Ping An’s campaign is being directed by the Chinese authorities, he did not believe this was the case.

“No, I do not believe it is politically motivated, based on all of the dialogue we have had with various stakeholders,” said Quinn. “Quite the contrary, we are viewed in Asia, in Hong Kong, in China, as an important international bank.”