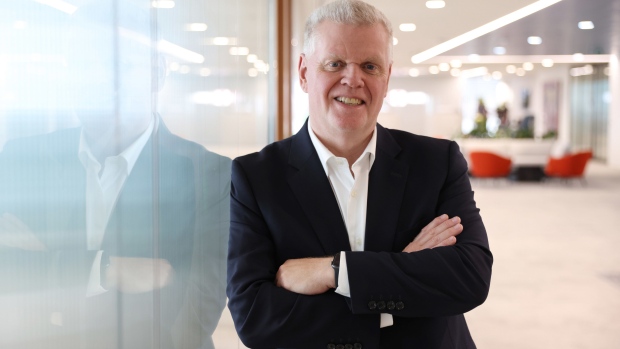 Noel Quinn, chief executive officer of HSBC Holdings Plc, at the HSBC headquarters in Canary Wharf, London, U.K., on Wednesday, Sept. 1, 2021. For the Birmingham-bred Quinn, who spent several years in Hong Kong as a commercial banker, making China once again the focal point will be key for his plans to turn the 156-year-old lender around. , Bloomberg

(Bloomberg) -- The boss of HSBC Holdings Plc, the biggest bank in Hong Kong, said he won’t do anything that would put the city’s efforts to open up travel to mainland China at risk, even as criticism of the financial hub’s zero-Covid policy grows.

In an interview at the Bloomberg New Economy Forum in Singapore, Chief Executive Officer Noel Quinn said he currently has no plans to visit the city, the lender’s biggest market.

“It’s important for Hong Kong to establish what they need to establish with China on reopening,” he said in an interview with Francine Lacqua. “I don’t want to do anything that may jeopardize that. I would love to get back to Hong Kong as soon as I can and when the authorities feel it’s right for me to go back, I will.”

The finance industry has been ratcheting up pressure on Hong Kong to ease its quarantine rules and abandon its zero-Covid policy amid concern it is becoming increasingly difficult to recruit and retain talent. A survey found almost half of major international banks and asset managers are contemplating moving staff or functions out of the city.

Quinn’s comment come after his counterpart at JPMorgan Chase & Co., Jamie Dimon, touched down in Hong Kong this week after receiving an exemption from the city’s stringent quarantine, where he highlighted that the restrictions were making it harder for the bank to retain talent.