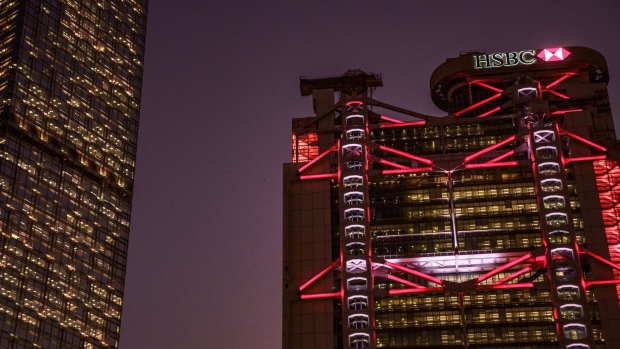 The illuminated HSBC Holdings Plc headquarters at night in Hong Kong, China, on Monday, Jan. 25, 2021. HSBC's Chief Executive Officer Noel Quinn is set to appear before the U.K. Parliament Foreign Affairs Committee to answer questions over the lenders moves to freeze accounts of activists in Hong Kong, according to an exiled lawmaker. Photographer: Lam Yik/Bloomberg , Bloomberg

HSBC Holdings Plc’s main Hong Kong office was closed until further notice after three people working in the building tested positive for COVID-19 amid a renewed wave of infections among the city’s business and expatriate community.

The Center for Health Protection has published a formal notice requiring visitors who stayed at the building for more than two hours between March 3 and 16 to undergo a mandatory test at a government-approved center by March 19, according to an internal memo. The move means staff and customers will have no access to the lender’s biggest branch in the city.

“It is our understanding that HMB can return to normal business when virus testing of colleagues and deep cleaning of the facility are complete,” HSBC wrote in the memo distributed on Wednesday. “The exact timing is yet to be confirmed.”

In a statement, a spokeswoman for HSBC said the bank is following the guidelines from the authorities and taking all necessary measures to reopen as soon as practicable. “For banking services, we have well-developed contingency measures that ensure our services and critical processes continue to be maintained,” she said.

The bank’s iconic main building in Hong Kong is located at 1 Queen’s Road Central, in the heart of the city’s business district. While it’s unclear how many staff were impacted, HSBC had 30,000 employees in Hong Kong, which contributed to more than 90 per cent of its adjusted pretax profit last year.

Early Wednesday, the building’s entrances were guarded by people wearing masks, face shields and protective gowns. A notice posted on the door directed customers to a nearby branch.

The recent up-tick in cases came after an outbreak at a Hong Kong gym popular among expatriates. The spread came just as the city was emerging from a prolonged round of social restrictions and venue closures. The renewed infections prompted banks, including Goldman Sachs Group Inc., to have more employees work from home.

While the cluster is smaller than a previous flareup in November linked to dance halls in the city, it has engulfed a tightly-knit world of mostly Western expats who work for global financial institutions and whose children attend international schools with annual fees of HKUS$250,000 (US$32,000) or more.

Several banks have advised staff to not come into the office. UBS Group AG told some to work from home after an employee tested positive while Goldman Sachs is reverting to a policy of 50 per cent of staff working from home, a spokesman said last week.​

A city of 7.5 million, Hong Kong has only had about 11,000 cases and has never enforced a strict city-wide lockdown, but its quarantine measures are among the world’s strictest. Close contacts of positive cases must enter centralized surveillance facilities for two weeks, and residents entering from outside of China have to spend 21 days in designated hotels.

The cluster linked to the gym, Ursus Fitness, is the city’s second-biggest of the pandemic, with 127 cases as of Tuesday after five more were confirmed. Authorities have sent at least 860 close contacts of those infected to quarantine.