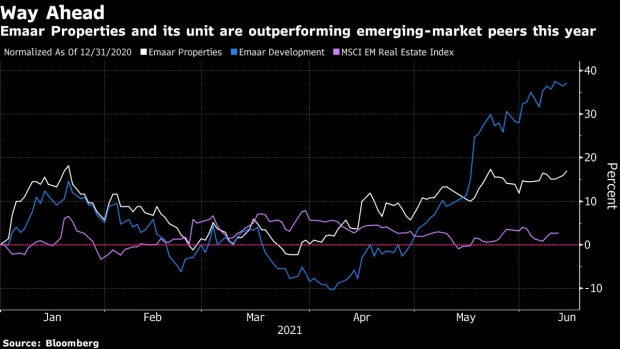 Morning fog shrouds residential and commercial skyscrapers in the Dubai Marina district of Dubai, United Arab Emirates, on Sunday, Jan. 17, 2021. Dubai is hoping one of the world’s fastest vaccination programs and rapid testing technology will help achieve its goal of holding the Expo 2020 event this year, after the coronavirus pandemic forced a delay. Photographer: Christopher Pike/Bloomberg , Bloomberg

HSBC raised its recommendation on Dubai’s top developer Emaar Properties PJSC to buy from hold, saying the stock offered more than 90% correlation to property prices. Emaar, which reported a threefold increase in five-month sales, represents the “best means” of capturing the trend for the migration to larger homes, the analysts said.

Business activity in Dubai has been picking up alongside a rebound in tourism and a fast distribution of coronavirus vaccines. The city has remained relatively open during the pandemic, and buying real estate is also one of the fastest ways for foreigners to get a residency permit.

For properties worth at least 10 million dirhams ($2.7 million), a record 84 changed hands in March alone, according to data from real estate consultant Property Monitor.

More from the report: