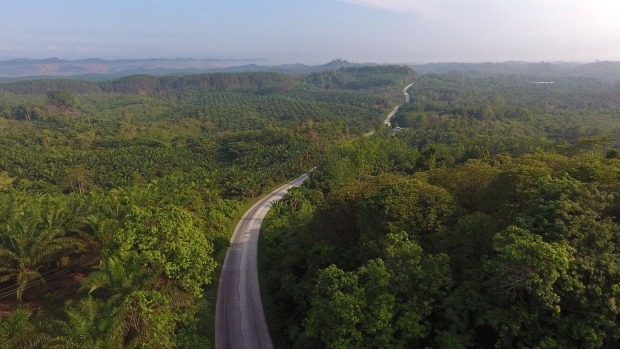 A road cuts through palm plantations and rainforest in this aerial photograph taken over the Penajam area of East Kalimantan, Borneo, Indonesia, on Wednesday, Nov. 27, 2019. For Jakarta, a city on the island of Java saddled with some of the worst superlatives in the region⁠—most polluted, most congested, fastest sinking⁠—the floods were an old story, the third time deluges have killed dozens since 2007. The problems have become so overwhelming that, even before the latest catastrophe, President Joko Widodo had decided to build a new capital 1,200 kilometers away on the island of Borneo. , Bloomberg

(Bloomberg) -- Investors looking for ESG strategies have been handed a new group of indexes promising to focus on biodiversity by excluding companies that are found to pose a threat to nature.

The Euronext ESG Biodiversity Screened Index series is being launched on Tuesday by HSBC Holdings Plc, which developed the product together with Euronext NV and Iceberg Data Lab SAS. The idea is to bring liquidity to a key corner of environmental, social and governance investing seen as vital to protecting the planet.

Concepts that once got short shrift in the world of global finance are slowly making their way to its core, as awareness spreads that the Earth is in the grip of an environmental crisis with potentially catastrophic ramifications. Though most of the public’s attention has tended to center on global warming, scientists have long been warning that other areas, such as biodiversity, also deserve urgent attention.

To attract more capital, HSBC is already planning to add a number of offerings to the index, including derivatives and structured finance products, Kondarjian said in an interview. “We hope to see good demand.”

Earlier this year, a global initiative was launched to measure the impact of financial institutions and corporations on the natural world, in the form of the Taskforce on Nature-related Financial Disclosures. TNFD is intended as a tool to help companies track their biodiversity footprint, and to give investors a better sense of how to allocate capital in a nature-friendly way.

There’s clear evidence to show that the natural world is already in crisis. Global wildlife populations have declined by an estimated two-thirds on average in the past 50 years, with up to 1 million species estimated to be facing extinction. The destruction of the planet’s biodiversity, as a result of human activity from deforestation to pollution, isn’t only troubling for conservationists and wildlife lovers. It also poses huge economic risks, which is why a growing number of financial firms are now paying attention.

“We are helping to develop business and investment models for enterprises that are finding ways to restore, manage and protect nature,” Marine de Bazelaire, HSBC’s group adviser on Natural Capital, said in a statement. “Biodiversity and ecosystems provide value to society in a myriad of ways such as food security, medicine, clean water, carbon removal and weather regulation. The decline in natural capital has been rapid and is ongoing.”

HSBC, which says the indexes it helped develop are the first to offer investors an opportunity to screen for biodiversity risks, has promised to put between $750 billion and $1 trillion toward decarbonization and climate protection initiatives by the end of the decade.