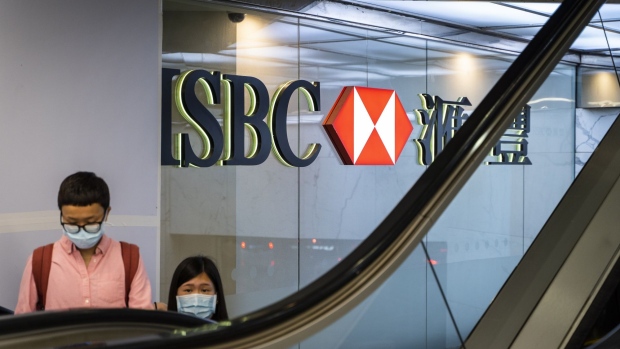 Customers wearing protective face masks use an escalator at the HSBC Holdings Plc headquarters building in Hong Kong, China, on Monday, Sept. 21, 2020. HSBC slumped below its financial crisis low set more than a decade ago as pressures mount on several fronts including a potential threat to its expansion plans in China. Photographer: Chan Long Hei/Bloomberg , Bloomberg

HSBC Holdings Plc will aim to reach a net-zero carbon client portfolio by 2050 in a step to align its business activities to the goals of the Paris climate agreement.

The London-based bank, which has previously come under fire for financing harmful environmental activity, also pledged to provide as much as US$1 trillion over the next decade to assist customers in reducing their carbon emissions. It’s also committed to achieving net-zero emissions in its own operations and supply chain by 2030.“

As we enter a pivotal decade of change, we have a landmark opportunity to accelerate our efforts to build a healthier, more resilient and more sustainable future,” HSBC Chief Executive Officer Noel Quinn said in a statement. “Our net-zero ambition represents a material step up in our support for customers as we collectively work towards building a thriving low carbon economy.”

HSBC follows JP Morgan Chase & Co.’s announcement on Tuesday that the U.S. bank is setting climate targets for its financing portfolio and planning a net-zero carbon footprint for its own operations.  Morgan Stanley said in September that it plans to eliminate net emissions from its financing activities by 2050.

HSBC also plans to work towards a “globally consistent, future-proofed” standards for measuring financed emissions and the carbon offset market. Other measures announced by the bank include regular disclosures on its progress and an assurance it will encourage its clients to do the same.  Earlier this year, HSBC launched a US$1 billion asset management arm with Pollination Group, a climate change advisory company, to support investment in natural assets such as water, soil and air.

HSBC has come under sustained pressure from environmental groups after providing loans worth billions of pounds for companies involved in deforestation. It ranks as Europe’s second-largest financier of fossil-fuel companies after Barclays Plc since the end of 2015, according to data compiled by Bloomberg. HSBC doesn't make specific mention of deforestation or fossil-fuel financing in its statement.

“This net-zero commitment is welcome,” said Hana Heineken, senior campaign manager at the climate group Rainforest Action Network. “But if HSBC is serious about dealing with the climate crisis, then it needs to stop funding fossil-fuel expansion and forest destruction now. Anything less is greenwash.”