One of the world’s largest banks is sending an encouraging signal about this country’s economy, as HSBC Bank Canada on Tuesday disclosed that during the third quarter it released $2 million from funds that had been set aside for loans that could go bad.

“This (release of $2 million) is a very important data point, which is that negative provisions are the likely outcome once the Canadian banks begin to reflect their changing/improving economic assumptions in their reserves,” wrote Robert Wessel, managing partner and co-founder of Hamilton ETFs, in an email to BNN Bloomberg.

HSBC explained its decision to ease up on provisions as being the result of “forward-looking macro-economic variables improved, partly offset by an increase in impairment charges from non-performing loans in the energy, transportation and construction sectors.”

By comparison, in the prior quarter, HSBC had set aside $190 million for potential credit losses as a result of concerns about COVID-19’s impact on the economy. 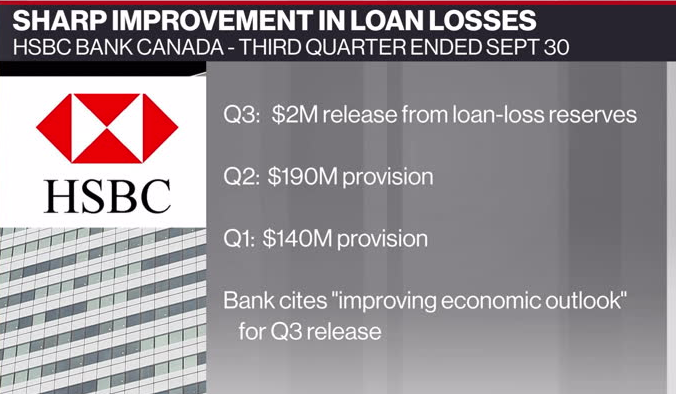 Wessel cautioned, however, that HSBC has some important distinguishing factors compared to Canada’s Big Six banks, including the fact that HSBC Bank Canada operates solely in this country, as opposed to its larger rivals’ international exposure. As well, HSBC has a heavy weighting in British Columbia, which has fared better than Central Canada in containing the spread of COVID-19.

“I would be very surprised if the Big Six banks released reserves this quarter, given the differences in loan/geographic mix. … However, once this process starts, the bank stock prices would rally very hard,” Wessel wrote.

Despite the improvement in the latest quarter, HSBC Bank Canada’s year-to-date charge for expected credit losses tallied $328 million as of Sept. 30, compared to $45 million a year earlier.

“Our results this quarter are markedly better than in the first two quarters of the year, largely due to moderating expected credit losses,” said HSBC Bank Canada CEO Linda Seymour in a release. “This is in line with improved forward-looking economic guidance, even after factoring in the resurgence of the pandemic that is now upon us.”