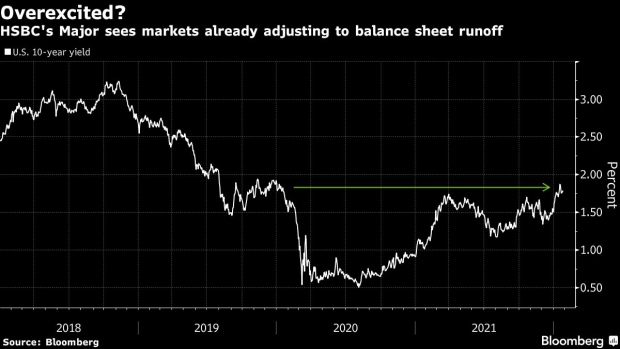 (Bloomberg) -- Investors bracing for a selloff in Treasuries as the Federal Reserve reduces its balance sheet will be disappointed, according to HSBC Holding Plc’s renowned bond bull Steven Major.

Speculation is proliferating over how the process known as quantitative tightening will impact the U.S. bond market, but yields have already moved higher in anticipation, HSBC’s head of fixed-income research wrote in a note to clients Wednesday.

“Our more considered view is that it is already being factored in,” Major said. A decrease in the supply of Treasuries should also soften the blow for the market, he added.

Markets have gone into tailspin this year as traders prepare for the Fed to dial back the unprecedented stimulus it unleashed during the pandemic. The yield on 10-year Treasuries climbed to as high 1.90% last week, a level last seen in January 2020, before the Fed flooded the market with liquidity by ramping up its bond purchases.

Fed Chair Jerome Powell has said policy makers would opt to reduce their balance sheet -- which stands at a record $8.8 trillion -- at some point this year. Traders will be looking for further clarity on how officials envisage this unfolding at their rate decision later Wednesday. Economists surveyed by Bloomberg expect the runoff of maturing securities to begin by September.

With other central banks such as the Bank of England also moving closer to shrinking their bond holdings, attention is turning to the fallout of tighter global financial conditions. Policy makers are treading a fine line between raising rates to counter inflation without snuffing out economic growth.

Still, Major says the challenge of quantitative tightening may be more acute for equities. For government bond yields, he expects hiking cycles to remain the key driver.

“We believe that today’s level of bond yield is best explained by the expected path of the policy rates, and the trend of the longer-run equilibrium,” wrote Major.

He sees the yield on 10-year Treasuries falling to 1.5% by the end of 2022. That’s the second most bullish forecast among 49 economists surveyed by Bloomberg and contrasts with a median estimate of 2.16%. The yield rose two basis points to 1.79% as of 7:11 a.m. in New York.