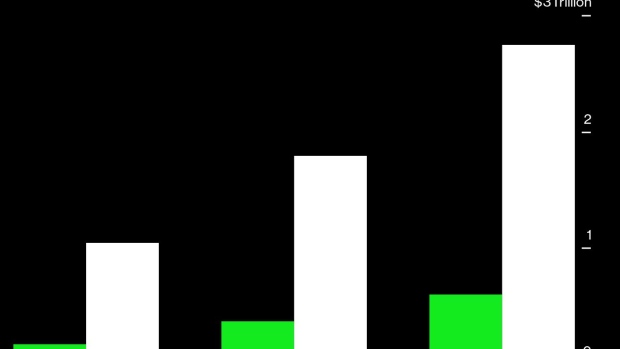 (Bloomberg) -- As the ESG industry digests the outburst from a senior banker at HSBC Holdings Plc, an early proponent of the environmental, social and governance movement is taking the opportunity to set the record straight.

Paul Clements-Hunt, the man who helped coin the acronym ESG in the mid-2000s, has characterized the comments by HSBC’s now-suspended Stuart Kirk as being out of touch with science.

“He represents yesterday’s bank executive,” Clements-Hunt said in an interview. “Ninety-five percent of the world’s scientists agree that climate is a huge risk.”

As head of responsible investing at HSBC Asset Management, Kirk gained notoriety last week when he publicly complained of the regularity with which “some nut job” has warned him of existential threats such as climate change. Memorable moments from his presentation, delivered at an event hosted by the Financial Times, include Kirk wondering why anyone would care if Miami were to find itself six meters underwater in 100 years. Importantly, he said, stock markets would probably continue to rise anyway.

Kirk’s presentation, from which HSBC’s senior management was quick to distance itself, has set off a rash of responses. Some financial professionals turned to social media to cheer Kirk for saying out loud what many are thinking. Others voiced dismay at the display of apparent indifference to climate change from such a high-ranking member of the financial firmament. And then there were those who wondered what it revealed about HSBC’s ESG strategy.

Sasja Beslik, author of “Where the Money Tree Grows,” said Kirk is just “expressing what many bankers think when the media isn’t around.” According to Beslik, who’s held jobs in sustainability at ABN Amro Asset Management, Nordea Asset Management and Bank J Safra Sarasin, “there is a lot of silent resistance to ESG in many big houses, partly due to the fact that bankers know that not everything they do is always ESG kosher.”

Kirk, who was in his role for less than a year, has become the newest voice to feed into a wider debate around sustainable investing. His remarks add to a growing list of anti-ESG outbursts that have featured high-ranking Republicans, including former Vice President Mike Pence, and a string of corporate executives, with Tesla Inc.’s Elon Musk the most vocal by far.

Clements-Hunt said it would be wrong for the ESG industry to ignore the critics.

“I welcome the debate,” he said. ESG was a kind of “virus we planted in 2004,” and it’s clear it posed a “threat to proponents of traditional finance because it was based on their own thinking and language, that is, material risks and fiduciary responsibility.”

For now, an industry that Bloomberg Intelligence estimates hit roughly $40 trillion in total assets this year, is grappling with its first signs of outflows since before the pandemic. That’s as a war in Ukraine, spiking energy prices and a cost of living crisis force ESG professionals to regroup.

Meanwhile, regulators are getting a lot more active in policing ESG claims, which is another development that Kirk bemoaned in his presentation. For HSBC’s investment clients, the comments were potentially revealing. On its website, HSBC Asset Management says its “ambition is to be a leader in responsible investment,” and that as “trusted guardians,” the firm helps clients “achieve their sustainability goals and fight against climate change.”

The next few years will see a “shakeout” of the ESG industry, according to Clements-Hunt. “Sustainability has been co-opted by opportunistic forces in the market. The market has run ahead of itself,” but “these are all growing pains,” he said.

According to Beslik, the Kirk comments ultimately “give you a good temperature on where ESG is,” and that’s “still mostly on the PR side.”

Matt Moscardi, an ESG consultant who spent almost a decade as an analyst at MSCI Inc., the biggest provider of ESG ratings, said there will be unintended positive consequences of Kirk’s remarks.

“I don’t agree with what a single word he said but all of this is exposing the gap between marketing and execution of ESG,” he said. “The best outcome is that every single asset manager and investment banker will start telling clients what exactly they are trying to achieve with ESG.”