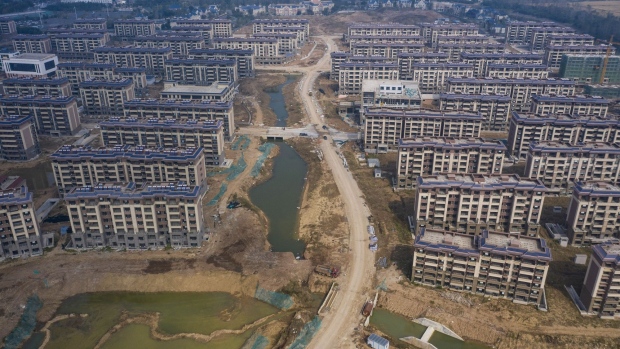 Unfinished buildings at China Evergrande Group's Health Valley development on the outskirts of Nanjing, China, on Friday, Oct. 22, 2021. China Evergrande Group pulled back from the brink of default by paying a bond coupon before Saturday’s deadline, giving the property giant at least another week to come to grips with a debt crisis that has rattled investor confidence in the world’s second-largest economy. , Bloomberg

(Bloomberg) -- HSBC Holdings Plc has guarded itself against mounting risks in the Chinese real estate market, picking firms that can steer clear of any fallout from the crisis enveloping China Evergrande Group.

Calling the trouble at Evergrande, “well telegraphed,” the London-based lender has been “highly selective” in the sector and doesn’t hold any exposure to firms that run afoul of the three red lines introduced on the industry.

HSBC doesn’t expect to see “any material fallout” from Evergrande, Chief Financial Officer Ewen Stevenson said in an interview Monday on Bloomberg TV after the bank reported a 36% rise in third-quarter earnings. Hong Kong’s real estate market has been resilient through many cycles and there won’t be any spillover into financial hub, he said.

The lender said it had mainland real estate exposure of $14.7 billion, plus Hong Kong incorporated property company exposure of $4.9 billion which has been booked in mainland China.

Despite recent crackdowns in China -- including anti-monopoly probes against big technology firms -- that have rattled global investors, Stevenson reiterated the bank’s commitment to the world’s second largest economy.

“We are China bulls,” he said. “We’re clearly not shying away.”

The lender is going after opportunities in the integration of the Greater Bay Area and the recently launched wealth link. HSBC has also been hiring for a wealth fintech platform in China.

HSBC’s China property exposure is focused on top-tier developers. As of June 30: