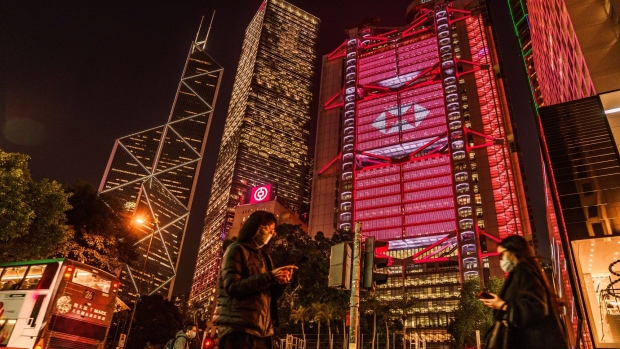 Pedestrians pass the illuminated HSBC Holdings Plc headquarters at night in Hong Kong, China, on Monday, Jan. 25, 2021. HSBC's Chief Executive Officer Noel Quinn is set to appear before the U.K. Parliament Foreign Affairs Committee to answer questions over the lenders moves to freeze accounts of activists in Hong Kong, according to an exiled lawmaker. , Bloomberg

(Bloomberg) -- HSBC Holdings Plc warned traders that one of the main risks to business continuity is the city’s quarantine policy as the Asian financial hub tightens to contain a fifth wave of infections.

Hong Kong, which is pursuing a Covid Zero strategy to match mainland China, has employed some of the strictest measures in the world to keep infections at bay. Authorities have sent close contacts of positive cases to quarantine camps for several weeks and also banned flights from eight countries, on top of mandating 21 days in hotel isolation for most incoming travelers.

“The risk we now face is not merely about being infected by Covid-19, but most importantly being being 1st,  and 2nd level close contact and being taken to government quarantine for 14 and 4 days,” the bank said in an email to staff in the division. “We are trying to protect staff from this risk and to continually be able to support the business.”

A spokesman confirmed the contents of the email.

As a precaution, the bank has split its global markets division into three, with a group of about 190 people working at its main office on Queen’s Road Central, a team of about 65 people placed at an office in Shek Mun, and a third team of about 200 working from home.

That split, which took place from Jan. 7, will likely last until Feb 4, according to the memo. Maintaining the separation is to manage risks to the trading floor, the email said.

Hong Kong is seeking to avoid a fifth large outbreak after the omicron variant emerged in the city. Other global banks, including Goldman Sachs Group Inc. and JPMorgan Chase & Co, have also tightened work rules at their offices in Hong Kong and moved to split teams.

Business groups have said the stringent approach is jeopardizing the city’s status as a financial hub while city officials maintain that it’s necessary to keep infections and deaths to a minimum as they also have made opening up travel to mainland China their top priority.

The strategy in November received the backing of Noel Quinn, HSBC’s chief executive officer, who said it was important for Hong Kong to get in place what they need to reopen travel to the mainland.