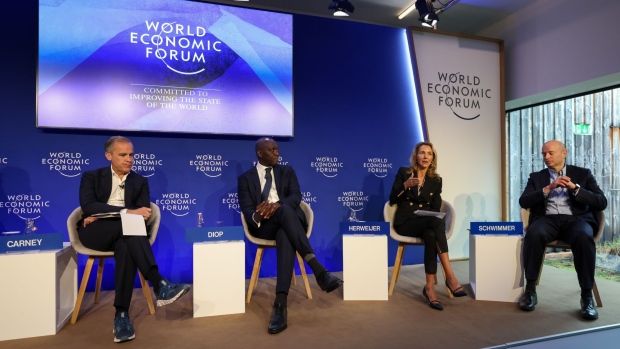 Celine Herwijer at the World Economic Forum in Davos, Switzerland, on May 25. Photographer: Hollie Adams/Bloomberg , Natasha White and William Shaw

(Bloomberg) -- The head of sustainability at HSBC Holdings Plc said the bank is repositioning itself for the “massive value creation” that’s set to come as the global economy decarbonizes.

Celine Herweijer, chief sustainability officer at HSBC in London, said achieving net-zero carbon emissions is “the focus of pretty much every single board meeting since I joined a year ago, every single executive meeting. It’s a huge transformation job across the bank,” she said during a panel at Davos on Wednesday.

The comments come just days after HSBC’s asset management unit suspended its head of responsible investment. Stuart Kirk gained notoriety last week after using a Financial Times event to complain that he repeatedly has to deal with “some nut job telling me about the end of the world.” He also publicly wondered whether anyone would care if Miami were to find itself six meters under water in 100 years.

Herweijer, who has publicly disavowed Kirk’s views and didn’t refer to him in her comments during the Davos panel, said that finance has a “critical role to play” in the transition to a net-zero carbon emissions economy.

Given HSBC’s geographic focus, the bank also faces a different set of challenges compared with many of its peers, she said.

“We have to be involved in transitional finance in Asia and that means we can’t introduce the blunt tools that might work in the West,” Herweijer said. “That would mean we couldn’t finance large state-owned energy companies in Indonesia, the Philippines or Malaysia, and that we couldn’t help them transition.”