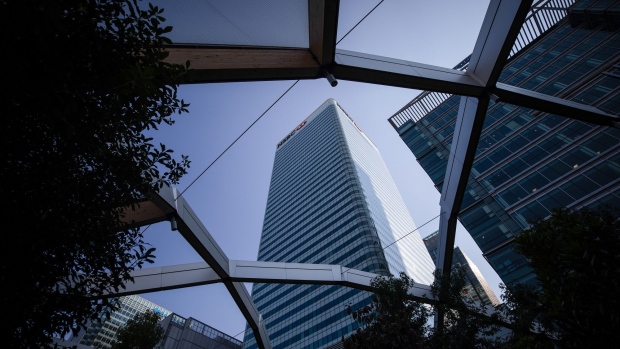 The HSBC Holdings Plc headquarters building stands in the Canary Wharf business, financial and shopping district of London, U.K., on Monday, Sept. 14, 2020. Londoners are steadily increasing their use of public transport after schools reopened, freeing parents to go back to the workplace. , Bloomberg

(Bloomberg) -- HSBC Holdings Plc has brought on boutique advisory firm Robey Warshaw as a defense adviser, as the bank moves to fight calls for a breakup from its biggest shareholder, people with knowledge of the matter said.

The London-headquartered lender is working with Robey Warshaw and Goldman Sachs Group Inc. on an internal review of the case for a split of the business, the people said, asking not to be identified because the information is private.

The preparations come after news broke late last month that Ping An Insurance (Group) Co. was pushing the lender to carve out its Asian operations as part of a plan to boost returns. HSBC executives are against the idea and have started working with bankers to analyze the case for a spinoff, as they prepare to challenge any push by Ping An to force the issue.

Representatives for HSBC and Robey Warshaw declined to comment.

Robey Warshaw is one of London’s top boutiques and was founded in 2013 by former Morgan Stanley bankers Simon Robey and Philip Apostolides, along with ex-UBS Group AG dealmaker Simon Warshaw. The firm’s profile was further raised last year when former UK finance minister George Osborne joined as a full-time partner.

The firm has worked on some of the UK’s highest profile mandates and recently advised a consortium led by former Guggenheim Partners President Todd Boehly on its bid for Chelsea Football Club.