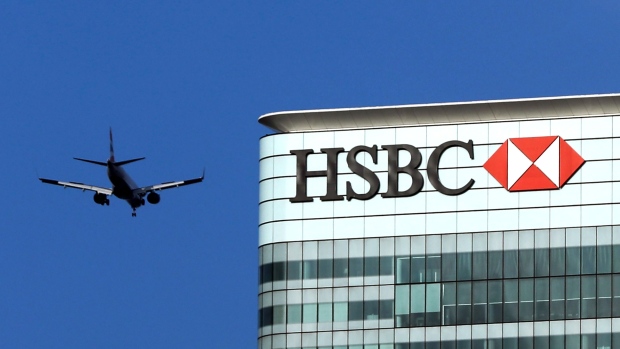 An aeroplane approaches city airport passing the offices of HSBC Holdings Plc in the Canary Wharf business, financial and shopping district in London, U.K., on Thursday, June 5, 2018. The owners of a Canary Wharf skyscraper leased to Citigroup Inc. are seeking to refinance the 661 million-pound ($882 million) loan used to buy it five years ago, two people with knowledge of the plan said. Photographer: Chris Ratcliffe/Bloomberg , Bloomberg

HSBC Holdings Plc warned it still expects to book higher credit losses on the back of the pandemic even after the Bank of England gave lenders leeway to deal with unpaid loans.

In an update to investors contained in the prospectus for its latest debt sale, HSBC said it would have to take into account the impact of virus on economies, when it measures potential losses in its upcoming financial results. The lender, which generates most of its revenue in Asia, added the economic disruption caused by the virus could have “adverse impacts” on the value of its assets, including its holding in China’s Bank of Communications Co Ltd.

The disclosure was made in a U.S. filing on Wednesday. Last week, the Bank of England said financial institutions should be flexible when applying the accounting rules, as part of a package of measures, which included canceling its annual banking industry stress tests.

“An immediate impact in early 2020 will be higher expected credit losses driven by a change in the economic scenarios used to calculate ECL,” said the bank. HSBC cited the new IFRS9 accounting standard, which requires banks to forecast their outlook for gross domestic product.

Europe’s largest lender said the actions taken by central banks and governments across the world to dampen the impact of the outbreak could lead to restrictions on the movement of capital. “These may limit management’s flexibility in managing the business and taking action in relation to capital distribution and capital allocation,” according to the bank.

Barclays Plc has already said the pandemic is likely to mean the bank will miss its profitability target. Speaking at a virtual conference last week, Barclays’ Chief Financial Officer Tushar Morzaria said it would be a “tough year for earnings.”