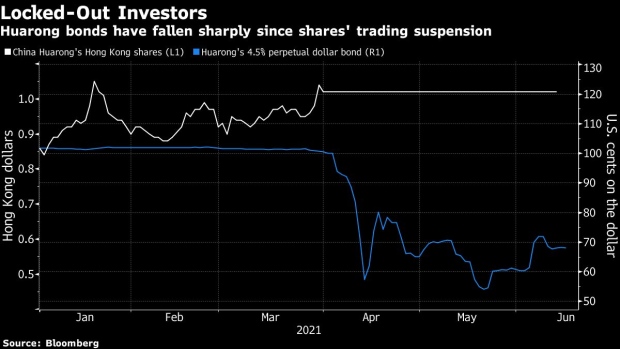 Wednesday marks the 50th trading day since Huarong shares were halted in Hong Kong after the bad-debt manager failed to release 2020 results. After reaching that threshold, most companies are dropped from MSCI indexes within three trading days, according to the firm’s rules.

Such a decision would impact exchange-traded funds with more than $210 billion of assets that track MSCI benchmarks of which Huarong is a constituent, including the MSCI Emerging Markets Index. The stock will be suspended until at least the company files its 2020 report with the city’s stock exchange. ETFs would have to sell as soon as trading resumes, said Brian Freitas, a New Zealand-based analyst who publishes on independent research website Smartkarma.

The government-controlled company’s equity investors have been locked out of the market while Huarong’s bonds have plunged since the delayed 2020 results helped kick off concern about the company’s financial health. The past two and a half months have also seen worries build about a potential restructuring -- and its impact on Huarong’s investors -- as well as how much state support could be forthcoming.

Huarong’s investor relations department could not be reached for comment about potential index removal.

Huarong was removed from FTSE Russell indexes effective June 4 but remains in benchmarks such as the Hang Seng Composite Index and the S&P Hong Kong-Listed China Index.

Policies from S&P Dow Jones Indices state that potential deletion is reviewed quarterly after a stock is suspended for more than 60 trading days, with the next evaluation date the end of August. Hang Seng Indexes Co. regulations call for a company to be removed from nearly all its benchmarks “as soon as possible” after a three-month trading halt for not releasing results.

“ETFs that contain suspended shares may be difficult to trade for many market makers, making the funds less liquid for investors,” said Evan Metcalf, a portfolio manager at ETF Management (AUS) Ltd. “We’re supportive of index providers dropping these names from their selections.”

Many mutual funds and other investors also track MSCI indexes. If Huarong is dropped from the benchmarks, it could become harder for the company to raise equity capital even if it emerges from its crisis without defaulting. The firm would also face a long wait to rejoin the indexes, as MSCI doesn’t consider a Chinese stock for inclusion if trading was suspended for a 50-day period in the past year.