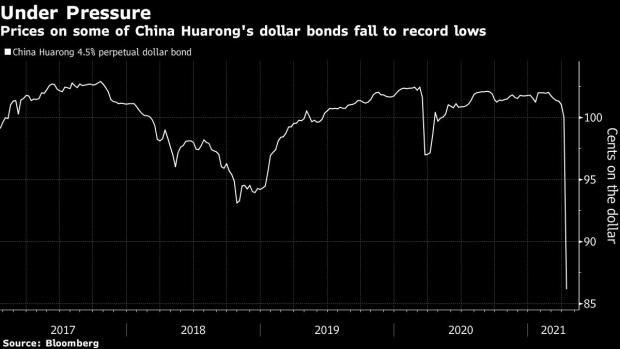 The China Huarong building stands in Beijing, China, on Thursday, Feb. 4, 2010. In the third quarter of last year, Beijing's office vacancy rate of 22.4 percent was the ninth-highest in the world of 103 cities tracked by CB Richard Ellis Group Inc., a real estate broker. Those figures don't include many finished buildings about to come on to the market, such as the city's tallest building, the 6.59 billion yuan ($965 million), 74-story, 3 million square foot China World Tower 3. Photographer: Bloomberg/Bloomberg , Photographer: Bloomberg/Bloomberg

(Bloomberg) -- China Huarong Asset Management Co. is preparing to offload non-core and loss-making units as part of a broad plan to revive profitability that would avoid the need for a debt restructuring or government recapitalization, according to people familiar with the matter.

The state-owned manager of non-performing loans, which spooked investors this month after delaying its earnings report, has submitted the plan to regulators and received positive initial feedback, the people said, asking not to be identified discussing private information.

Huarong is still determining the value of its stakes in some units and finalizing which ones will be sold, part of the reason it held off releasing 2020 results, the people said. The company is also awaiting final approvals from Chinese authorities.

The overhaul proposal may come as a relief to investors, who have dumped Huarong’s bonds and those of several peers on speculation the delayed earnings report was a harbinger of stress at a company that’s deeply intertwined in China’s financial system. Huarong’s financial health has in fact improved over the past year, the people said.

Representatives from Huarong and the China Banking and Insurance Regulatory Commission didn’t immediately respond to requests for comment.

Beijing-based Huarong is one of four Chinese companies formed in 1999 to help clean up bad debt in the country’s banking system, which had about 2.7 trillion yuan ($412 billion) of non-performing loans as of Dec. 31. Huarong held a $2.5 billion initial share sale in 2015, giving it a market value of more than $15 billion.

The company is now worth about $5 billion, based on the closing price of its Hong Kong shares on March 31. Trading in the stock has been halted since then. It may remain so until Huarong receives a sign-off from regulators on its overhaul plan, one of the people said.

Huarong’s former chairman, Lai Xiaomin, was sentenced to death in January on bribery charges and later executed. He had expanded the company into areas including securities trading, trusts and other investments, deviating from the original mandate of disposing bad debt.