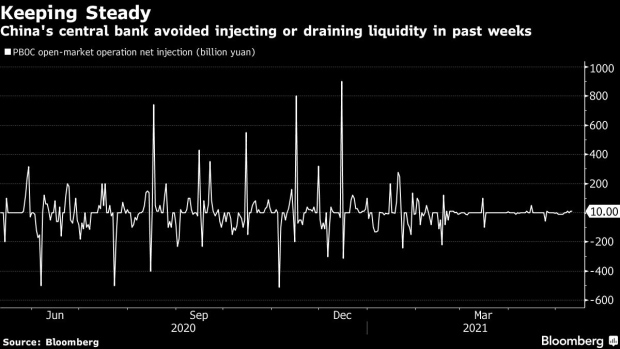 Speculation of a potential debt restructuring by one of the country’s biggest state-owned financial companies jolted markets recently, triggering worries about contagion. While those fears appear to have faded in recent days, financial risks remain in the broader economy, with Chinese companies defaulting on local bonds at the fastest pace on record this year already.

Against that backdrop, economists say the People’s Bank of China will take longer than previously expected to wind back its pandemic stimulus. The central bank hasn’t commented directly about Huarong but in its quarterly report released Tuesday, the PBOC alluded to financial risks while also downplaying inflation worries, suggesting its policy stance will remain neutral for now.

“Concerns of financial risks will affect the pace of China’s monetary policy normalization,” said Wang Tao, chief China economist at UBS AG. Emerging credit risks are one of the key reasons behind authorities’ pledge for “no sharp turn” in policy this year, she added.

The PBOC’s latest report mirrors comments from the Communist Party’s Politburo meeting last month, when leaders vowed to prevent and resolve economic and financial threats. The central bank highlighted financing pressures at local governments and pressed for creating a system that would hold local officials accountable for major financial risks.

With the economic recovery getting stronger and last year’s credit boost fueling worries of asset bubbles, markets have been searching for clues on how fast the PBOC plans to withdraw its stimulus. So far, the central bank has kept the benchmark loan prime rate unchanged for the past year, and largely avoided injecting or draining liquidity through daily open market operations over the past two months.

Huarong’s failure to release 2020 financial results triggered weeks of bond market turmoil. The bad loan manager owes domestic and international bondholders the equivalent of $42 billion, making it one of the most widely-held Chinese state-owned enterprise debt worldwide. Any default would shatter the markets’ core assumption that the government will always provide help to important state companies in times of trouble.

“If the market thinks Huarong’s debt problem is not handled well, that could trigger worries over the entire SOE sector and cause a systemic contagion effect,” said Wang.

Huarong’s offshore bonds tumbled in April as investors panicked over the prospect of taking a loss in a potential debt restructuring, even though the company insists it can repay its debts. Huarong has so far met all of its obligations on time and has said it is operating normally with sufficient liquidity. China’s banking and insurance regulator has also said Huarong has ample liquidity.

China’s macro leverage ratio, the proportion of debt to gross domestic product, declined 2.6 percentage points in the first quarter to 276.8%, with the PBOC saying Tuesday the country successfully guarded against any occurrence of systemic risks. The central bank will improve the mechanism for preventing and resolving bond default risks, and crack down on any attempt to evade debts, it said.

The Politburo’s suggestion of creating a mechanism that holds local officials accountable for financial risks could mean the government is more worried about the potential spillover effect of rising credit defaults and bad loans, according to Wang.

“Huarong is a large financial institution, majority-owned by the Ministry of Finance. If even institutions like that could risk restructuring, policy makers should consider whether other state-owned and private enterprise are facing similar risks,” said Liu Li-Gang, managing director and chief China economist at Citigroup Inc.

With China’s non-financial corporate debt climbing over the past decade to over 160% of GDP, highly-indebted companies will suffer from an increase in debt repayment costs if monetary policy is tightened too fast, Liu said. A hasty withdrawal of stimulus could potentially lead to “major financial market turmoil and stress,” he said.