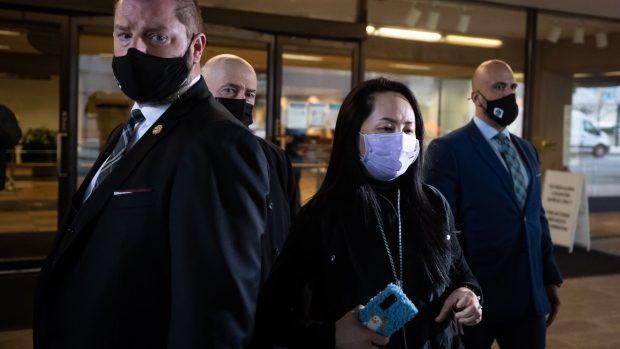 Meng Wanzhou, chief financial officer of Huawei Technologies Co., center, exits Supreme Court after a hearing in Vancouver, British Columbia, Canada, on Friday, Jan. 29, 2021. Meng's request to loosen the bail terms set during her release from jail in 2018 has been rejected, a Canadian judge ruled on Friday, as she fights a U.S. extradition case. , Bloomberg

(Bloomberg) -- Huawei Canada will still support Meng Wanzhou’s “pursuit of justice and freedom” as the chief financial officer returns to the British Columbia Supreme Court for the next phase of extradition proceedings, the company said in a statement.

The court will hear arguments related to the four branches of abuse of process raised by Wanzhou’s counsel, including political motivation, unlawful detention, material omissions and misstatements and violations of customary international law. The four points argue that the extradition proceedings are an abuse of Canada’s judicial process and must be stayed.