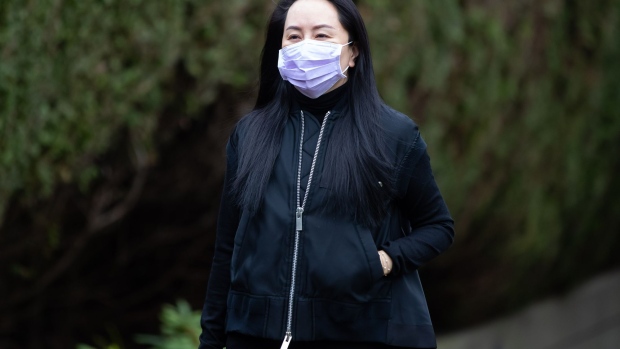 Meng Wanzhou, who’s fighting extradition to the U.S. from Canada, asked a London court to give her permission to obtain the records. She argues the documents will show what the bank knew about Huawei’s ties to Iran-linked company Skycom that sparked the extradition request.

The 48-year-old Chinese executive was arrested in Canada on a U.S. handover request in December 2018 and later released on $10 million bail (US$7.9 million). U.S. authorities allege that Meng, the eldest daughter of Huawei’s billionaire founder Ren Zhengfei, misled banks into handling transactions that violated American sanctions.

Among the information she is trying to obtain are HSBC documents related to a Powerpoint presentation Meng gave to the bank in Hong Kong in 2013.

Meng says the presentation made clear that Skycom was a business partner of Huawei and worked with the firm in sales and services in Iran, her lawyer James Lewis said in a court filing released Friday.

But U.S. prosecutors and HSBC contest this. They say the presentation was misleading because Meng failed to state that Huawei controlled Skycom’s operations in Iran. The U.S. alleges that because of this, HSBC continued to provide banking services to Huawei, including clearing U.S. dollar transactions related to Skycom’s commerce in Iran, Lewis said.

A spokesman for HSBC said the disclosure application is without merit. The bank isn’t a party to the criminal case in the U.S. or the Canadian extradition proceedings, he said.

The bank’s lawyer, Rupert Allen, argued at Friday’s hearing that the London court has no jurisdiction to interfere in the dispute.

If the court were to grant Meng’s request, it would “impose an enormous burden on banks” and likely cause “a huge flood in disclosure applications,” Allen said.

A spokeswoman for Huawei declined to comment. Meng’s extradition proceedings are scheduled to start in March.

She hopes to use the bank’s records in “in support of her abuse of process and evidential sufficiency arguments in the extradition proceedings,” Lewis said.

Huawei was indicted along with Meng by federal prosecutors in the Eastern District of New York. While Meng fights extradition, the case against the telecommunications firm has proceeded without her. No trial date has been set yet.

Prosecutors have refused to provide the firm with documents they’ve sought so far, arguing some of the evidence is so sensitive it should only be seen by Huawei’s lawyers in America and not shared with others outside the country or with Meng.