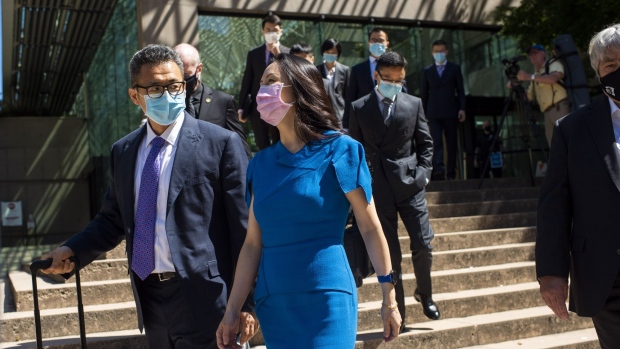 Meng Wanzhou, chief financial officer of Huawei Technologies Co., center, leaves for a lunch break after a morning hearing at the Supreme Court in Vancouver, British Columbia, Canada, on Wednesday, Aug. 4, 2021. Meng faces long odds as her extradition fight enters its final phases, more than two and a half years after her arrest triggered an unprecedented diplomatic impasse between China, the U.S. and Canada. , Bloomberg

Huawei Technologies Co.’s chief financial officer Meng Wanzhou’s extradition hearing in Vancouver is over, bringing to a close more than two years of proceedings that have triggered an unprecedented geopolitical tussle among the U.S., China and Canada.

In the coming months, Associate Chief Justice of the British Columbia Supreme Court Heather Holmes will decide whether or not Meng, 49, the eldest daughter of Huawei’s billionaire founder Ren Zhengfei, should be handed over to the U.S. to face criminal fraud charges.

Meng faces long odds as her extradition fight enters its final phases, more than two and a half years after her arrest triggered an unprecedented diplomatic impasse between China, the U.S. and Canada.

Meng has been fighting extradition since her arrest during an airport stopover in Vancouver in December 2018. Prosecutors in Brooklyn, New York, have charged her with fraud, claiming she lied to HSBC Holdings Plc about Huawei’s operations in Iran as part of a scheme to violate U.S. trade sanctions.

China’s Communist Party views her case as a politically motivated attack on one of its chief technology champions -- within days of her arrest, two Canadians were jailed in China on spying allegations and remain imprisoned.

Following the conclusion of the hearing Wednesday, Holmes scheduled a case management conference for Oct. 21 and said she expected to indicate at that time when she would release her decision.

In the final weeks of hearings, Canadian prosecutors revisited the key arguments of the U.S. request: that Meng misled an HSBC executive during a meeting at a restaurant in 2013, that the deception was deliberate, and that HSBC continued to process Huawei’s transactions as a result, putting itself at risk of financial penalties and loss to its reputation.

Her lawyers dispute those characterizations, arguing that there was no deception because HSBC was fully aware of Huawei’s activities in Iran and never suffered any sanctions-related penalties or losses. They also claim the U.S. doesn’t have jurisdiction over the alleged offense.

“What happened on the 22nd of August, 2013, in a Hong Kong restaurant between a Chinese national and an Anglo-Chinese bank is a matter of international law, no business of the United States,” Meng’s lawyer Gib Van Ert told the judge in March. “If any laws were broken that day, that is the concern of China, in whose territory the events occurred.”

Under Canadian law, an extradition judge’s role is limited -- questions about the reliability of the evidence or the defendant’s guilt or innocence are left to the trial judge in the U.S. Meng’s team has urged Holmes to take a broader view, pointing to higher court decisions and saying she should “act as a judge, not a rubber stamp.”

“The ultimate objective is to persuade Judge Holmes that the U.S. case is so tainted by politics, dishonesty and misconduct that extradition should be barred,” said Nick Vamos, a lawyer at Peters & Peters LLP in London and former head of extradition for the U.K.’s Crown Prosecution Service. “Although the judge is allowing Meng’s lawyers to make these arguments, it is far from clear whether she sees any merit in them.”

Within the restrictions of Canada’s extradition law, Holmes has appeared to give the defense every opportunity to make its case. In April, she granted Meng’s request to delay the proceedings to give her legal team time to sort through and submit documents obtained from HSBC by order of a Hong Kong court. In the end, the judge didn’t allow the evidence into the case and denied the defense’s request to throw the case out.

The history of Canadian extradition proceedings to the U.S. overwhelmingly favors prosecutors: of the 798 U.S. handover requests received over 10 years ending in 2018, Canada has only refused or discharged eight, according to Canada’s Department of Justice. Forty cases were withdrawn by the U.S.

If Holmes denies the extradition request, Meng would be discharged and released, according to Canada’s extradition process. If she orders Meng’s extradition, the case would go to Canada’s Minister of Justice David Lametti, who ultimately decides whether to hand her over to U.S. authorities.

Meng will also have 30 days to appeal, which could trigger the start of an extended legal battle that may take many more years to resolve. Some extradition cases in Canada have stretched on for as long as a decade.