Escalating tensions between China and Canada triggered by the arrest of Huawei Technologies Co.’s finance chief is having a dramatic impact on two of the world’s hottest apparel stocks.

Canada Goose Holdings Inc. (GOOS.TO), the trendy maker of premium parkas, has tumbled almost 20 per cent over the past four days. However, the stock opened higher on Tuesday. At the same time, Bosideng International Holdings Ltd., a Hong Kong-based downy apparel maker, has jumped nearly 13 per cent to a five-year high.

“Canada detained Huawei’s CFO, while Canada Goose is from there,” said Linus Yip, Hong Kong-based strategist at First Shanghai Securities Ltd. “It is possible that some consumers would change their feelings over the brand and choose to buy other brands. Some may opt to buy domestic brands like Bosideng.”

Should Canadian brands that have expanded in China be worried about fallout from Meng’s arrest?

Canada Goose is a high-profile target in part because its name so clearly announces its roots. Other Canadian brands with a strong presence in China, such as IMAX Corp. and Tim Hortons Inc., haven’t seen significant share moves or been singled out for boycotts.

As the world’s largest luxury market, China is playing an important role for brands including Canada Goose. The company, which is the second-best performer in Canada’s benchmark stock index this year, has set big goals for expansion in China. The brand took off there partly after celebrities including billionaire Jack Ma were photographed wearing the coats.

Bosideng, meanwhile, has seen its own success, rallying 138 percent this year to become one of the best performing stocks on the Hang Seng Composite Index. The company has successfully reshaped its brand in the past year through collaborating with top-tier designers, launching high-profile fashion shows and targeting younger customers, said Liou Huei-Chen, analyst at KGI Hong Kong Ltd. Solid first-half results announced last month and recent cold weather are helping the shares, she said. 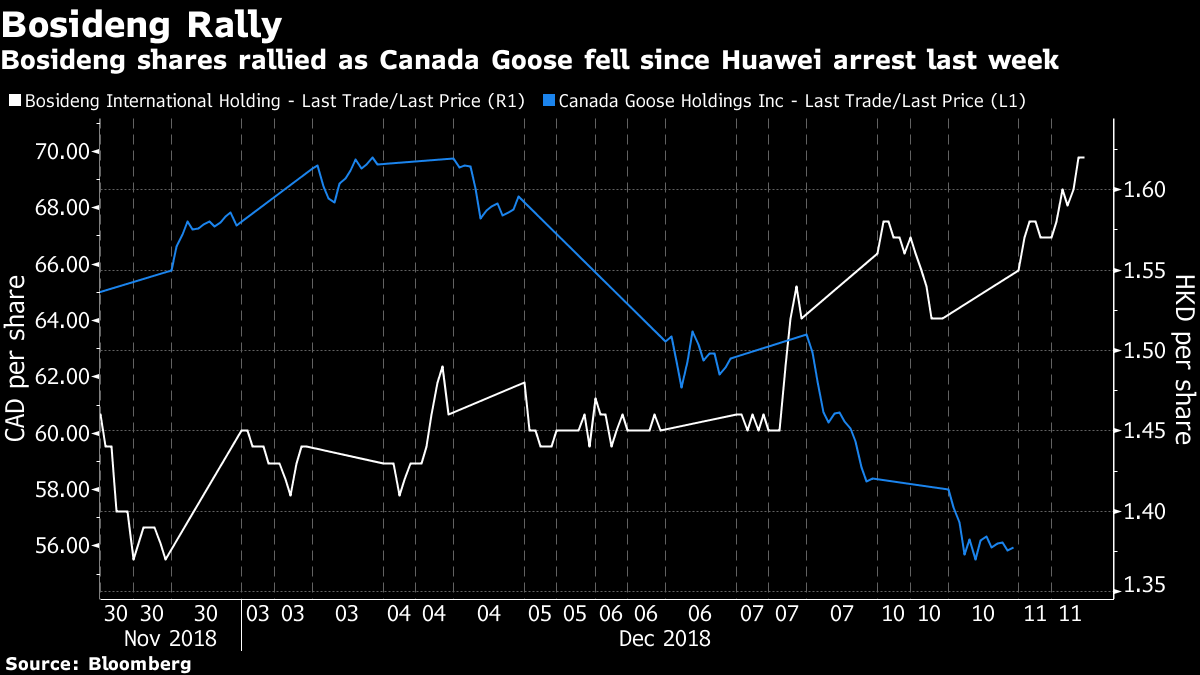