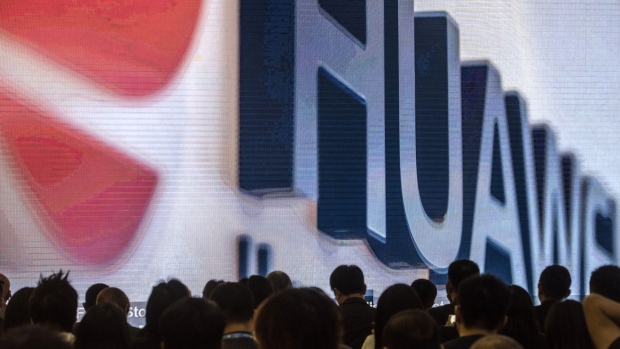 Huawei Technologies Co. signage is displayed on a screen during a product launch event at Huawei's Executive Briefing Center in Beijing, China, on Wednesday, May 15, 2019. Huawei overtook Apple Inc. to claim the No. 2 spot in global smartphone sales in the first quarter, second only to Samsung Electronics Co. , Bloomberg

A federal judge in Brooklyn granted the government’s request to remove James Cole, a former official at the Justice Department, from defending Huawei Technologies Co. and Huawei Device USA, which the U.S. has accused of violating sanctions on Iran.

U.S. District Judge Ann Donnelly acted after federal prosecutors argued that Cole, during a stint as deputy attorney general, had access to classified matters they argued have a “substantial” connection to Huawei.

Donnelly held a hearing in September that was partly sealed because classified matters were discussed. During the public segment, she questioned an argument by Huawei’s lawyers that Cole, a partner at Sidley Austin LLP, should be permitted to remain on the case because he doesn’t remember them.

“If there really is a conflict, and in the middle of the trial, all of a sudden, a memory is triggered, we don’t want to be in that position, do we?” Donnelly said.

Assistant U.S. Attorney David Kessler said at the hearing that while Cole served as Attorney General Eric Holder’s deputy from 2011 to 2015, he had been privy to discussions of a “prior matter” that had a “substantial relationship to this one.” A lawyer for Huawei, Michael Levy, argued that the request to remove Cole was “part of an overall agenda which the government has against Huawei” and a tactical step to hobble the defense.

Donnelly didn’t issue a public ruling Tuesday, only posting an order on the court docket. She said she would issue an unclassified, redacted decision by Jan. 10.