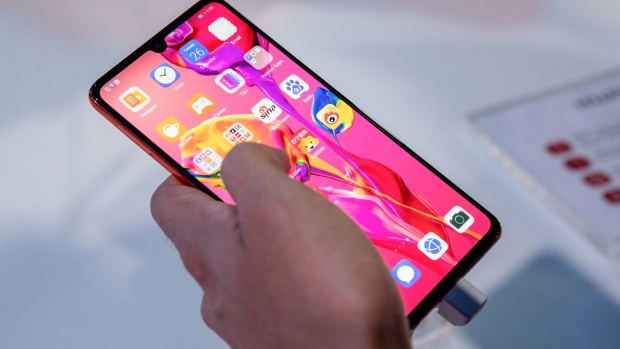 The belfry of Berlin’s landmark Kaiser Wilhelm Memorial Church, an imposing former imperial church that was preserved as a partial ruin after World War II, is now wrapped in a huge ad for Huawei, the Chinese electronics company. Unlike on previous occasions when something like this was tried, Berliners aren’t protesting.

The setup is symbolic of the ascent of Huawei Technologies Co. outside the U.S., a trajectory that has not been changed by an all-out offensive against the company by the Trump administration. Although that onslaught mainly targets Huawei’s network equipment business — the U.S. tells its allies that the company’s equipment represents a spying threat — it could be expected to tarnish a brand that is China’s sixth and the world’s 48th most valuable, according to Kantar’s BrandZ ranking for 2018. That, however, doesn’t appear to be the case. Global consumers are delivering a quiet vote of no-confidence in Donald Trump’s U.S. The country where Apple Inc.’s iPhone was born may soon find itself in the bizarre position of shunning the global industry leader — a type of spiteful self-harm hardly befitting the global tech superpower.

In the market for 5G network equipment, mobile operators often find it difficult to replace Huawei products because the Chinese company has spent years building an edge in the emerging technology. But the smartphone market is so competitive that only one company in it, Apple, has significant profit margins. There are plenty of alternatives to Huawei phones, many with similar specifications and at lower prices. And at least since December, when Huawei’s Chief Financial Officer Meng Wanzhou was detained in Canada at the request of the U.S., the U.S. government has been running an influence campaign against the company.

Yet Huawei’s sales in its biggest segment, the consumer one, have been booming. The company is now “within striking distance” of absolute leadership in smartphone sales, as the market analytics company IDC noted this week. In the first quarter of 2019, Huawei’s unit sales increased 50.3 per cent year-on-year, while most other major vendors’ dropped.

Unlike some of the unit sales leaders, such as Oppo and Vivo, Huawei did not draw a large majority of its sales from China. According to IDC data, half of the company’s unit sales in the latest quarter occurred in the home market. Europe, the Middle East and Africa provided a further 33 per cent of the sales — only slightly less than for Samsung Electronics Co., the current, declining market leader.

Huawei achieved this in part by closely tracking Samsung’s offerings and pricing strategy in every region. According to Bloomberg Intelligence, its phones are, on average, just a tiny bit cheaper than the Korean competitor’s everywhere except China, where Huawei’s leadership is assured, and Canada and Japan, where the price differences are more stark.

But, especially since last year, Huawei has grown explosively in the high-priced segment. It offerings, especially the 2018 Mate 20 Pro released in October, have been getting rave reviews and top rankings — often above Apple’s flagship models. One reason is the partnership with German premium camera manufacturer Leica. It has led to impressive results, especially in low-light photography, where reviewers deem top-range Huawei phones to be far ahead of the competition. 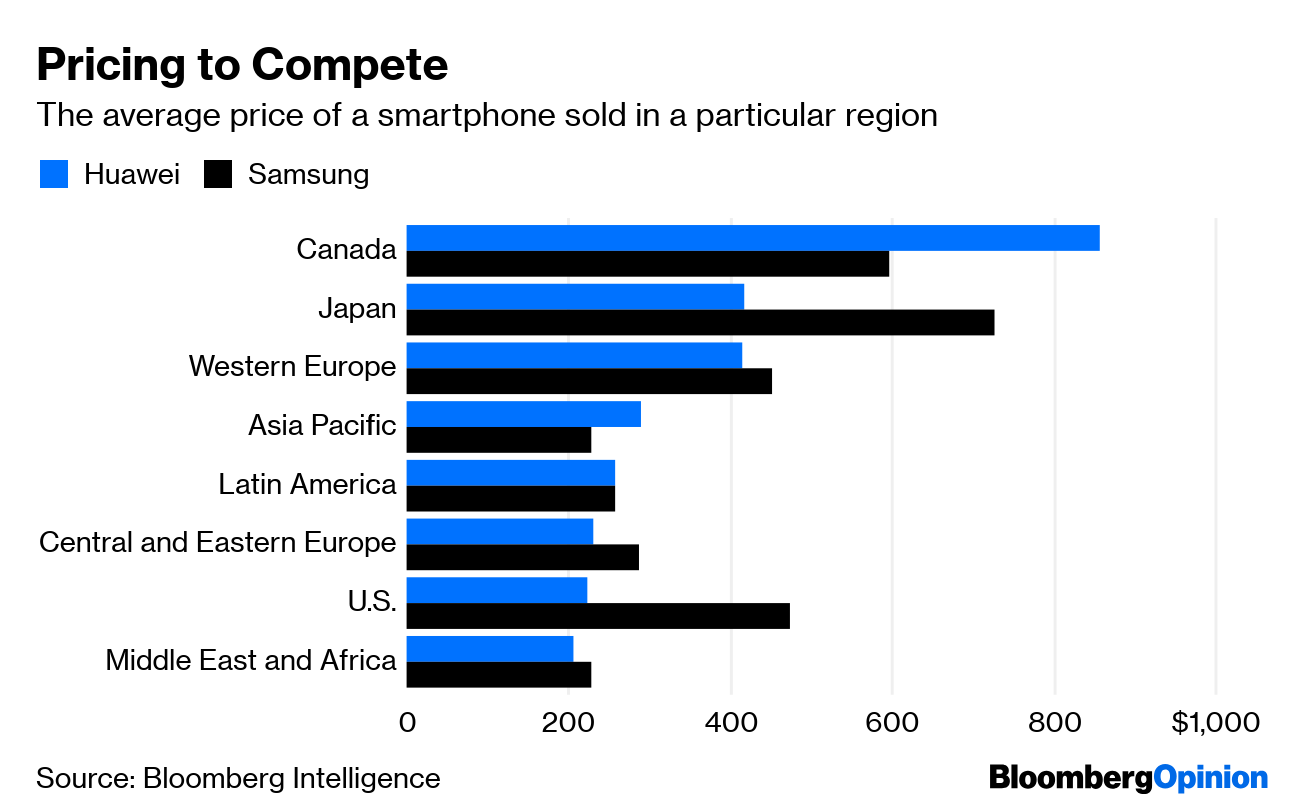 Huawei’s flagship phones are priced uncompromisingly in line with competitors, but in an era of incremental improvement, they deliver tangible advantages, especially when it comes to photography. With Samsung forced to delay its first foldable phone after reviewers discovered multiple problems, Huawei has a chance to strengthen its position by offering the first such device. The technological robustness is unsurprising: Last year, Huawei spent 14.1 per cent of revenue on research and development, compared with Apple’s 5.3 per cent and Samsung’s 7.5 per cent.

In absolute terms, Huawei spends about as much on marketing as on R&D — its selling and administrative expenses reached 105.2 billion yuan (US$15.6 billion) last year. Although that’s less than Apple’s US$16.7 billion and Samsung’s US$28 billion, it’s still an enormous budget, especially given that Huawei doesn’t need to market its products in the U.S. Despite numerous attempts, it has failed to establish a relationship with any of the U.S. mobile carriers, which sell 90 per cent of all phones.

Much of Huawei’s marketing spending is focused on Europe, where it’s been opening flagship stores, plastering city centers with ads (I’ve seen huge ones everywhere I’ve traveled recently, from Denmark to Romania) and engaging in projects like the one with the Memorial Church. Berliners aren’t demonstrating against it as they did in 1999, when advertising first covered the belfry, because the church has explained it’s the only way it can collect most of the 4 million euros (US$4.5 million) necessary for the belfry’s renovation. The church’s foundation discussed the Huawei contract after the U.S. campaign began but decided to go through with it, deeming the American accusations against the company “vague.”

Whether Huawei is employee-owned, as it claims, or state-controlled, as American researchers have recently claimed, whether it’s the Chinese government’s Trojan horse in consumers’ pockets or merely a smart, fierce competitor in a tough market, it’s well-positioned to overtake Samsung as the unit shipment leader in smartphones — despite having sold just US$70 million worth of phones in the U.S. last year. As it makes this power grab, it’s doing its best to fix a problem that has confounded Samsung: How to extract more profit from innovation, as Apple does, instead of competing on price. Last year, its gross margin reached 38.6 per cent, about the same as Apple’s 38.3 per cent and more than the 37.8 per cent Samsung is projected to record this financial year.

At this point, the only way for the U.S. to try to derail Huawei would be to slap on it the kind of sanctions that were briefly imposed on another Chinese vendor, ZTE Corp., last year: a ban on the use of any U.S. technology. But even then, Huawei would fight back. It has made a conscious effort to produce as many components as possible in-house, including crucial ones like processors. It recently announced that it had developed its own operating system in case it’s banned from using Alphabet Inc.’s Android.

With Huawei second in global smartphone unit sales, it should be hard for Americans to understand why a company whose products are so popular in the rest of the world is, for all intents and purposes, absent from the U.S. market. Surely many U.S. customers, given an opportunity to buy Huawei phones from carriers, would be as unimpressed by the government’s spy paranoia as their peers in Europe or Latin America. If Huawei ever reaches the top spot, the question will loom even larger.