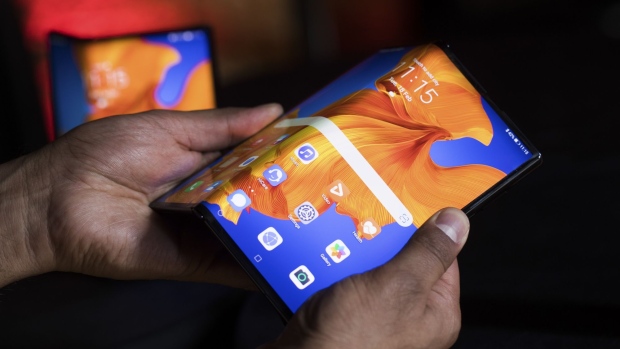 An employee holds a Mate Xs folding smartphone, manufactured by Huawei Technologies Co., at a launch event in London, U.K., on Tuesday, Feb. 18, 2020. The Chinese company on Monday announced a second-generation version of its Mate X folding phone, which up to now has been sold mostly in its home country. Photographer: Chris Ratcliffe/Bloomberg , Bloomberg

(Bloomberg) -- Huawei Technologies Co., whose smartphone business has been devastated by U.S. sanctions, is planning to license its handset designs to third parties as a way to gain access to critical components, people with knowledge of the matter said.

The Shenzhen-based tech giant is considering licensing its designs to a unit of state-owned China Postal and Telecommunications Appliances Co., or PTAC, which will then seek to buy parts barred under the Trump-era blacklisting, said one of the people, asking not to be identified discussing internal matters. The unit, known as Xnova, is already selling Huawei-branded Nova phones on its e-commerce site and the partnership will see it offer self-branded devices based on the larger company’s designs.

Chinese telecom equipment maker TD Tech Ltd. will also sell some phones featuring Huawei’s designs under its own brand, another person said. The partnerships are subject to change as negotiations are still ongoing.

The company sold its Honor sub-brand to a consortium led by a state-owned company in Shenzhen about a year ago, freeing the business from U.S. sanctions. Honor is now able to buy components from suppliers including Qualcomm, Chief Executive Officer George Zhao has said. The success of that spin-off has encouraged Huawei to seek new partnerships to keep its consumer business alive.

Engineers at Huawei have already begun redesigning the circuits of some marquee smartphones previously powered by the company’s in-house HiSilicon chips so they can adapt to Qualcomm or MediaTek Inc. processors, said one of the people. Huawei expects the partnerships could bring smartphone shipments -- including inhouse models and those sold by partners -- to more than 30 million units next year, the person added.

Huawei declined to comment. PTAC and TD Tech didn’t respond to emails and phone calls seeking comment. PTAC is a unit of China General Technology Group Holding Co., a key machinery maker and importer directly controlled by the central government. TD Tech was set up in 2005 with assets from companies such as Siemens AG, though the German multinational said in an email it is no longer a shareholder in the venture.

Huawei has been struggling to find a new cash cow to make up for the hole left by its quickly shrinking consumer electronics business, which booked 483 billion yuan ($75.6 billion) in revenue last year, equal to International Business Machines Corp.’s annual sales. The latest arrangement is unlikely to bring in meaningful profit for Huawei, but such partnerships could be essential in helping the company maintain its smartphone development capabilities.

The Biden administration has shown no signs of easing off on the sanctions imposed on Huawei, though Chief Financial Officer Meng Wanzhou recently struck a deal that released her from a U.S. extradition request that had kept her under house arrest in Canada for two years. Executives including founder Ren Zhengfei, Meng’s father, have vowed to continue making smartphones.