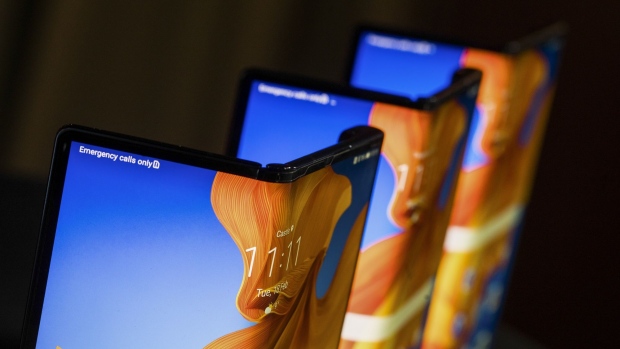 Mate Xs folding smartphones, manufactured by Huawei Technologies Co., stand on display at a launch event in London, U.K., on Tuesday, Feb. 18, 2020. The Chinese company on Monday announced a second-generation version of its Mate X folding phone, which up to now has been sold mostly in its home country. Photographer: Chris Ratcliffe/Bloomberg , Bloomberg

(Bloomberg) -- Huawei Technologies Co. continued to bolster its lobbying operation in Washington even though a spending surge hasn’t dented restrictions on its ability to do business in the U.S.

The Shenzhen-based company spent $1.4 million on lobbying in the third quarter, a 29.2% increase from its sharp uptick in spending the previous quarter. That puts the company’s expenditure up 1,270% from the third quarter of 2020.

Meng Wanzhou, Huawei’s chief financial officer, returned to China in September after nearly three years under house arrest in Vancouver fighting extradition to the U.S. on fraud charges. She struck a deferred prosecution agreement with U.S. authorities to resolve the criminal charges against her.