An employee walks past a logo in the reception area of the Huawei Technologies Co. Cyber Security Transparency Centre in Brussels, Belgium, on Monday, April 15, 2019. Huawei's ability to make inroads into Europe's future telecom infrastructure may be more about regulatory hurdles than outright bans. , Bloomberg

Huawei Technologies Co. will overhaul its executive ranks next year after revenue growth slowed further in the latter half of 2019, when U.S. sanctions spooked more customers and suppliers around the globe.

China’s biggest technology company recorded an 18 per cent rise in sales to 850 billion yuan (US$120 billion) this year, down from about 23 per cent in the first half and missing its own internal targets. Huawei should brace for a similar hit in 2020 if the White House maintains curbs on the sale of software and circuitry it needs, like essential Android phone apps, Rotating Chairman Eric Xu said in a memo to Huawei’s 190,000 employees.

Huawei went to a war footing after the Trump administration blacklisted the Chinese goliath in May, labeling it a threat to U.S. national security. In response, Huawei mobilized thousands of engineers to develop alternatives to crucial U.S. components and keep its factories humming, while appealing to domestic users to drive 16.5 per cent growth in shipments to 240 million smartphones in 2019. But Xu in his memo talked about the need to weed out as many as 10 per cent of the company’s worst-performing managers in 2020. Some support or even operational units will be merged or downsized, Xu said, adding employees could get re-assigned to other divisions.

“Survival will be our first priority,” Xu, one of three executives who take turns running the tech giant during the year, said in a memo provided to Bloomberg. “We won’t grow as rapidly as we did in the first half of 2019, growth that continued throughout the year owing to sheer momentum in the market.” 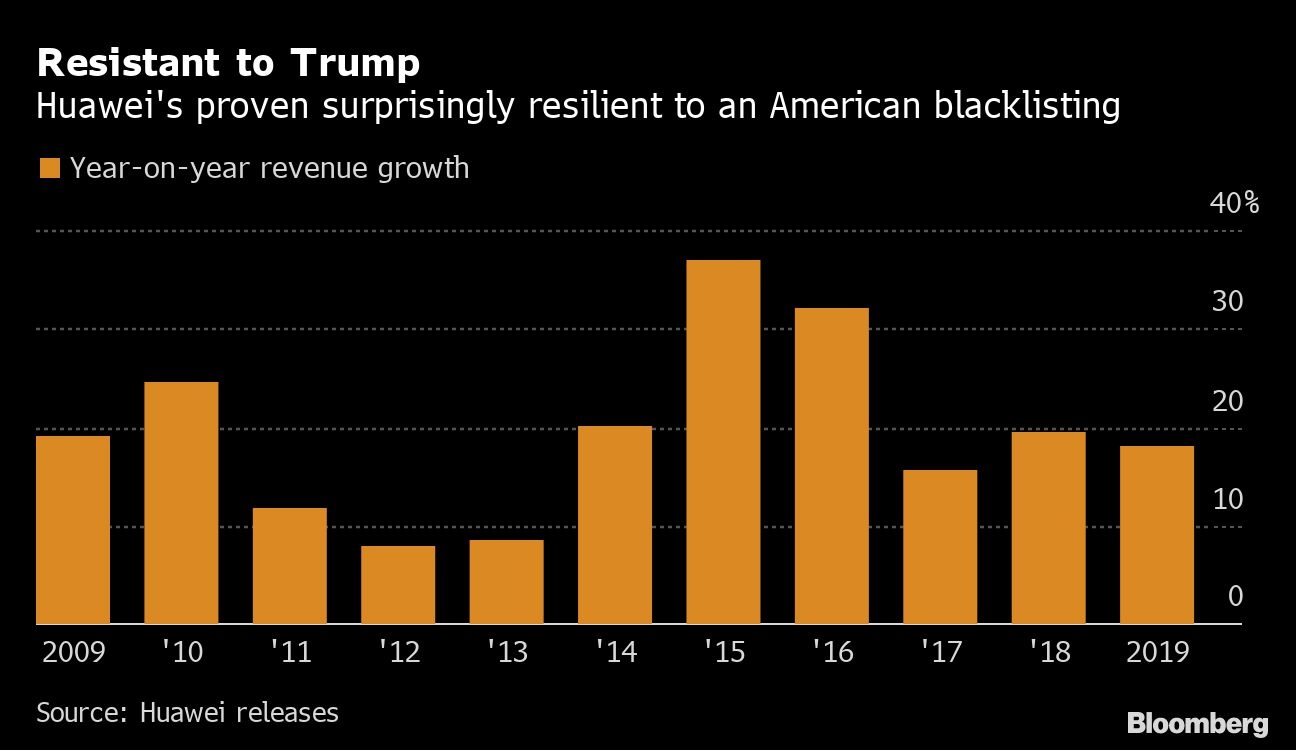 White House sanctions have hit Huawei’s smartphone unit in particular, because the company is barred from using Google’s Android operating system and applications including Google Play and Gmail, Huawei’s billionaire founder Ren Zhengfei has said. Huawei, the world’s second largest smartphone vendor, grew its global smartphone shipments by 28 per cent in the third quarter, further closing the gap with Samsung Electronics Co., according to latest data from IDC. The advance was mainly driven by domestic demand, where Huawei took more than 40 per cent market share.

In the 2,000-word memo, Xu also highlighted major tasks for 2020. The company is betting on its own mobile apps ecosystem, known as Huawei Mobile Services, to continue driving phone sales overseas without Google’s suite of apps. It’s also aiming to expand the use of self-made chips in cloud and enterprise businesses, he added.