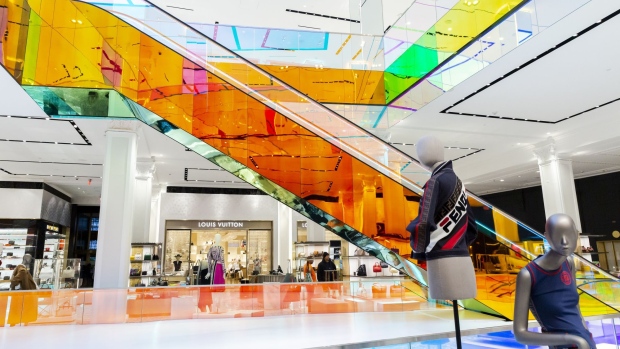 (Bloomberg) -- Hudson’s Bay Co. reported a weak sales quarter and a drop in gross margins, blamed in part on a “hyper-promotional environment” that extended even to luxury goods at its Saks Fifth Avenue stores.

Comparable sales, a closely watched metric for the industry, fell 0.4%, the Toronto-based retailer said in a statement Thursday. Sales rose 0.6% at Saks, the slowest pace in at least eight quarters for the unit that’s lately been the company’s lone bright spot. Margins dropped by 530 basis points.

Hudson’s Bay, the eponymous chain in Canada that’s the oldest company in North America, continues to struggle as it takes out 300 “unproductive” brands and brings in another 100. Comparable sales slipped 3.4%, the third consecutive drop.

Chief Executive Officer Helena Foulkes said in the statement that the “second quarter demonstrates that we are still in the early stages of what HBC can become.”

HBC is the target of a takeover by Chairman Richard Baker and his partners, who own about a 57% stake in the retailer. The offer is for roughly C$9.45 a share. The special committee formed by Hudson’s Bay’s board has already said Baker’s proposal is inadequate. The stock closed Wednesday at C$10.20 in Toronto.