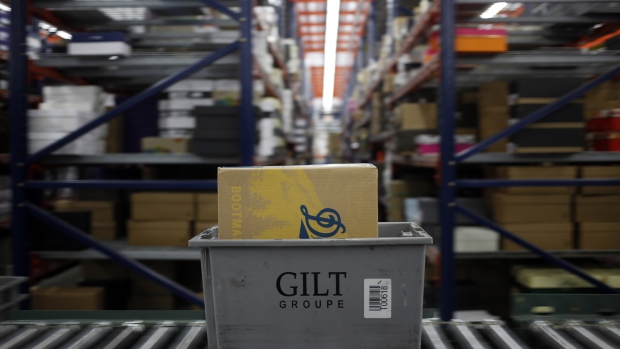 The cleanup continues at Hudson’s Bay Co., the owner of Saks Fifth Avenue.

The struggling Canadian retailer agreed to sell Gilt, a flash-sale, e-commerce company it bought two years ago that has become one of its worst-performing businesses. The buyer, Rue La La, announced the purchase on Monday without disclosing a price, and said it plans to run the two sites independently and hire 150 people.

Hudson’s Bay (HBC,TO) shares rose before the sale was announced, jumping 7.2 per cent to $10.62, the biggest one-day gain since November.

The move is the first major decision by new Chief Executive Officer Helena Foulkes, adding to measures to turn around the company that include selling the landmark Lord & Taylor building in Manhattan, unloading a minority stake to a private equity firm to reduce debt, and striking partnerships with Walmart Inc. and WeWork Cos. The retailer is due to report quarterly earnings Tuesday morning.

Hudson’s Bay failed to revive Gilt even after combining inventories with its other discount business, Saks OFF 5TH. It agreed to buy Gilt for US$250 million in 2016. At the end of fiscal 2017, it wrote off $63 million “due to further deterioration in operating results.”

Rue La La believes it can do better and capitalize on its mobile-first approach. The combined company, which will be named Rue Gilt Groupe, “will serve over 20 million members with a focus on young, affluent, fashion and brand-conscious consumers,” Rue La La said in a statement.

--With assistance from Lindsey Rupp.