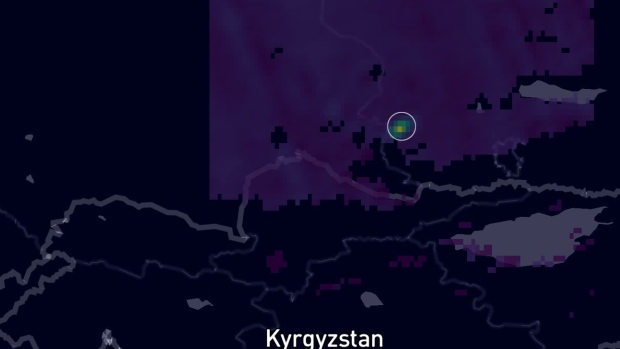 The cloud was observed roughly 100 kilometers (62 miles) west of the largest Kazakh city of Almaty on July 24, and had an emissions rate of more than 200 tons of methane an hour, according to an estimate from geoanalytics firm Kayrros SAS. That amount of the super-warming greenhouse gas would have roughly the same short-term climate warming impact as the annual emissions of 10,000 cars in the UK.

“This large emission event matches the pattern of methane release observed from gas infrastructure,” said a spokesperson for Kayrros. “A pipeline and compressors are in close proximity, and based on information Kayrros has access to there are no other candidates for the observed release.”

KazTransGas JSC, which operates the Kazakh portion of the Central Asia-China pipeline, said it didn’t have any leaks and the country’s energy ministry didn’t immediately provide a response to queries about the plume. The 1,833-kilometer pipeline helps transport gas mostly from Turkmenistan through Uzbekistan and Kazakhstan to China.

Satellite detection of methane plumes from natural gas have revealed a greater climate impact from the fossil fuel long promoted by producers as a bridge to renewables as the world decarbonizes. Beijing plans to boost imports of gas from Turkmenistan, the South China Morning Post reported in May.

Methane is the largest component of natural gas, and it is the second-largest contributor to warming the planet after carbon dioxide. Levels of the greenhouse gas in the atmosphere are rising fast, partly because of increase in oil and gas activity globally. A steep reduction in methane emissions is considered one of the cheapest and easiest ways to slow the increase in global temperatures.

Kayrros couldn’t say how long the release lasted because the analysis was based off a single satellite observation captured by the European Space Agency’s Sentinel-5P satellite as it passed over Kazakhstan that day in July.

Multiple studies show that methane emissions from oil and gas infrastructure are often higher than what operators and governments report. Public and private satellite data are helping spot methane plumes in countries including Russia, Canada and Australia.