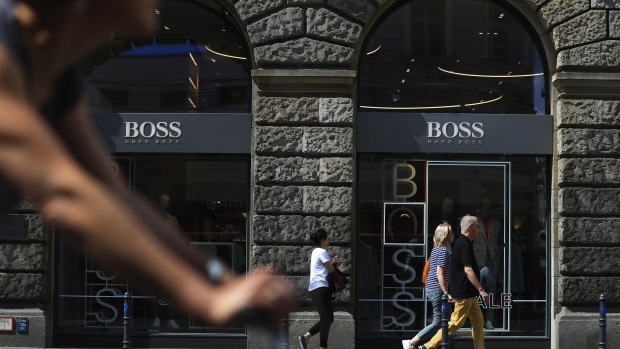 (Bloomberg) -- Hugo Boss plans to revamp its clothing range and double sales to 4 billion euros ($4.74 billion) by 2025 as part of a wider plan to attract younger shoppers to the German fashion chain.

The new strategy laid out Wednesday by new Chief Executive Officer Daniel Grieder also includes a target of hitting an operating profit margin of 12% by 2025, the level it was at before the pandemic hit a retailer, best known for its suits and other formal wear.

Hugo Boss has been trying to reinvent itself for the past few years and was hard hit by the move toward casual wear as more people worked from home during lockdowns. Sales have begun to recover in the second-quarter as pandemic restrictions have eased in Europe.

The revamp will focus on its two main brands, Hugo and Boss. The Hugo brand will seek to cater to young and trend-setting customers with cutting-edge, streetwear and colorful designs while Boss will continue to focus on quality suits with a twist, potentially even providing a unisex collection while remaining focused on its black, camel and white colors.

Grieder also floated the prospect that in time Hugo Boss could greatly expand its range and offer jeans, underwear, sneakers and even makeup alongside suits.

“We’re going to have a comeback,” Grieder said during the presentation. “After the pandemic, casualization became the norm,” he said. Smart casual and leisure offerings will become a priority in the future, he added.

Shares in Hugo Boss have recovered by more than 90% so far this year but Chief Financial Officer Yves Mueller said the group wants to see further share price growth. The new targets are likely attainable, Citigroup analyst Thomas Chauvet wrote in a note to clients.

The company plans to plow 500 million euros into refurbishing 80% of its store network and more than 150 million euros in improving its digital capabilities by 2025. Grieder, a former Tommy Hilfiger executive who joined the chain in June, also wants to sell more via third parties, a process known as wholesale distribution. This runs counter to Hugo Boss luxury peers such as Burberry Group Plc or Prada SpA who have been reducing their wholesale exposure, focusing instead on their own retail network.

Grieder said collaborations with other brands and celebrity endorsement deals are under consideration as this will help the group’s brands get “fans” as well as customers, he predicted.

“Hugo Boss’ mission to improve its brand image is critical to weather the remainder of the pandemic,” Harry Barnick, analyst at Third Bridge said. A focus on digital distribution and a clearer distinction between the Boss and Hugo brands is “essential if the company is to succeed.”