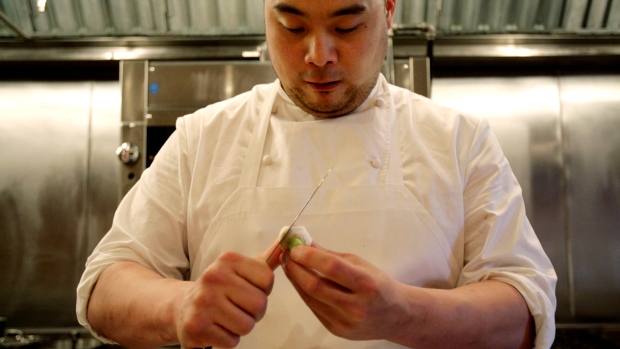 Hulu is turning to foodies in search of its next 5 million subscribers.

The streaming service has ordered its first slate of original food programs, which will be produced by celebrity chef David Chang, model and cookbook author Chrissy Teigen, and Vox Media, the owner of food site Eater. Two of its first projects are “Family Style,’’ about cooking for friends and family, and “Eater’s Guide to the World,’’ a documentary series.

Hulu, owned by Walt Disney Co. and Comcast Corp., is expanding its pipeline of of unscripted programs to boost its customer base in the U.S. The service now has 26.8 million paid subscribers, it said Wednesday, up from about 23 million at the end of last year.

Cooking shows have been a staple of traditional TV for decades, with the Food Network and Bravo’s “Top Chef’’ hooking viewers. In more recent years, documentary-style food shows such as “Chef’s Table’’ have already been a success in the on-demand world for Netflix Inc., Hulu’s larger rival.

The push into food is part of a programming slate that Hulu will preview for advertisers in New York on Wednesday. The streaming service, known for shows like “The Handmaid’s Tale’’ and “Casual,’’ also will unveil new scripted fare. That includes two new shows based on characters from Marvel comic books, a drama with Nicole Kidman, and a series starring Kate McKinnon as disgraced startup founder Elizabeth Holmes.

But unscripted programs, from competitions to talk shows to travelogues, are cheaper than dramas and just as addictive for viewers. Netflix has touted its success with “Chef’s Table,’’ “Nailed It!’’ and “Queer Eye,’’ a reboot of a popular styling show.