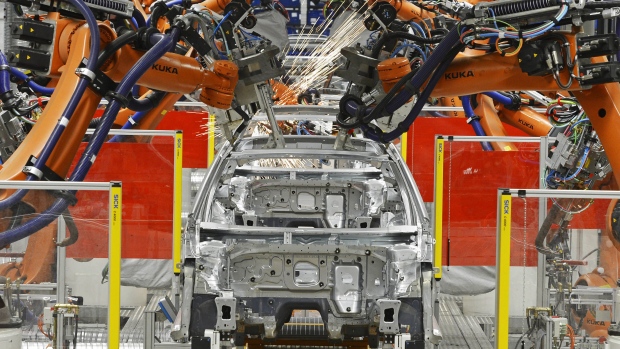 More than three decades after Honda Motor Co. (HMC.N) first built an Accord sedan at its Marysville, Ohio, factory in 1982, humans are still an integral part of the assembly process -- and that’s unlikely to change anytime soon.

Even as doom-and-gloom reports suggest robots are poised to replace human labor and automotive upstarts like Tesla Inc. aim to largely remove people from the production line, workers keep toiling side-by-side with machines in Marysville. And Honda’s approach is working: The Accord won the prestigious North American Car of Year award at last week’s Detroit auto show.

“We can’t find anything to take the place of the human touch and of human senses like sight, hearing and smell,” Tom Shoupe, the chief operating officer of Honda’s Ohio manufacturing unit, said in an interview.

Honda isn’t alone. Japanese rival Toyota Motor Corp. (TM.N) uses just a handful of robots on the Camry final assembly line at its plant in Georgetown, Kentucky, and has no plans to add more, according to Mark Boire, chief production engineer. Markus Schaefer, production chief at Mercedes-Benz, in 2016 said the carmaker was de-automating and relying more on humans to install the endless array of options that luxury customers demand.

The carmakers’ approach to running their final assembly lines casts doubt on studies suggesting robots are on the verge of wiping out massive numbers of manufacturing jobs.

A McKinsey Global Institute report from December, for example, found that as many as 375 million workers globally may need to switch professions by 2030 due to advancements in automation. About 57 per cent of the 1.4 million U.S. jobs that will be disrupted by technology between now and 2026 are held by women, a separate study released Monday at the World Economic Forum’s annual meeting in Davos found.

Like other carmakers, Honda does use robots for almost all painting and welding. The company even installed an all-new weld shop with 342 robots to make the Accord’s redesigned metal body. But in final assembly, where workers install motors, wheels and interior trim components, the level of automation hasn’t changed much since the Marysville opened, according to plant manager Rob May.

The 10th generation Accord, which Honda began building in high volume in September, is still made with a balanced combination of manpower and machine. Before the company launched the new model, it installed a big blue robot to lift rear suspensions up into the bottom of the car. But it also assigned two humans to place six bolts and four brackets on the suspension before the robot begins its lifting.

The robot isn’t smart or dexterous enough to reach in and around the suspension to place the bolts where they need to go, May said. The workers must use their left hand for some bolts and their right hand for others, since they’re operating in a tight, awkward space, and they have to visually inspect their work -- all in the span of about 40 seconds.

“You have to have timing,” said James Erwin, 47, a 15-year Marysville veteran and one of the workers loading the blue robot, nicknamed G-Smurf. “I don’t think robots can take over. They don’t have the manual dexterity or judgment that we have.”

All told, Honda uses only about 20 robots for its Marysville final assembly line, May said.

In meetings with state leaders in Columbus about economic growth, Honda’s Shoupe said he often encounters other businessmen and women worrying that robots are wiping out Ohio jobs. But he says his own view is fundamentally different. What concerns Honda instead, he said, is finding enough new recruits to replace long-time workers as they retire. The average Marysville worker now has 29 years of seniority.

Carmakers keeping fully staffed assembly lines offers a distinct contrast to electric-car maker Tesla (TSLA.O), where Chief Executive Elon Musk promises a factory within a few years where workers won’t actually build cars, but rather, attend to the robots that do.

“You really can’t have people in the production line itself. Otherwise you’ll automatically drop to people-speed,” Musk said on an August 2016 conference call when describing his eventual automation plans. “There’s still a lot of people at the factory, but what they’re doing is maintaining the machines, upgrading them, dealing with anomalies. But in the production process itself there essentially would be no people.”

Musk reiterated the point in November, calling speed “the ultimate weapon” on the production line. ‘‘We are pushing robots to the limit in terms of the speed that they can operate at, and asking our suppliers to make robots go way faster, and they are shocked because nobody has ever asked them that question. It’s like if you can see the robot move, it’s too slow.”

Tesla, which has been burning through cash bringing its Model 3 production up to speed, made just 2,425 of those sedans in the fourth quarter, well below the 5,000 a week run rate it said in August it was targeting by the end of 2017. The company announced the acquisition of Perbix, a closely held maker of automated machines used for manufacturing, in November, a week after Musk cited challenges with automating Model 3 production.

Back in Marysville, Honda continues to take delivery of the 3 million parts received each day and transform them into 1,900 finished vehicles. Last year, Honda sold 322,655 Accords in the U.S. market alone, making it the sixth-best-selling car or SUV model.

“We don’t automate for the sake of automating,” Shoupe said, “and that’s regardless of what Tesla or anyone else is doing.”