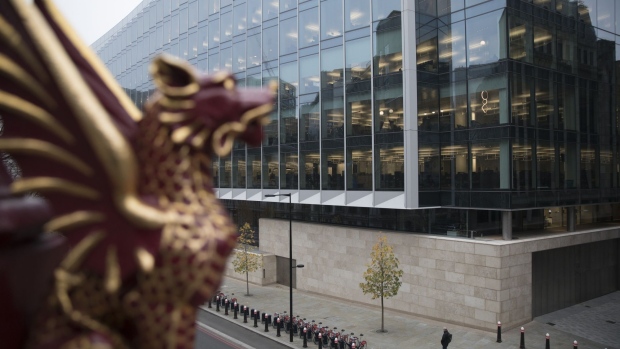 (Bloomberg) -- Hundreds more JPMorgan Chase & Co. and Goldman Sachs Group Inc. bankers have returned to their London offices since the U.K. government eased its “stay at home” guidance on March 29.

About 15% of JPMorgan’s staff in the city -- about 1,800 people -- came into the office last week, up from about 10% since Christmas, according to a person familiar with the matter. Goldman is expecting attendance to increase in the coming weeks to about 20% of its roughly 6,000 workers in the U.K. capital, another person said, asking not to be named discussing private information.

The U.K. is inching out of its third Covid lockdown and banks of all types are looking to establish future working practices. Some financial firms are starting to entice employees back to deserted offices and an empty City of London, while other have moved to embrace remote work.

“Organizations need to understand what their employees need and what will enable them to do their best work,” said Allison English, deputy chief executive officer of workplace research firm Leesman. “The decision is certainly not a binary ‘home or office’ one.”

The property market is watching the return to work. A 37-storey skyscraper in the heart of the City is being put up for sale for 1.8 billion pounds ($2.5 billion), according to the Telegraph. The price tag -- a record for a London office building -- will be a test of investor appetite for offices following the pandemic.

Returning bankers are also being welcomed by city administrators.

City center “ecosystems rely upon footfall,” Mayor of London Sadiq Khan said in an interview on Bloomberg Television Tuesday. “I’m hoping over the course of the next few weeks and months people will start returning back to the city.”

The Guardian earlier reported that more Goldman bankers were returning to the office in London.