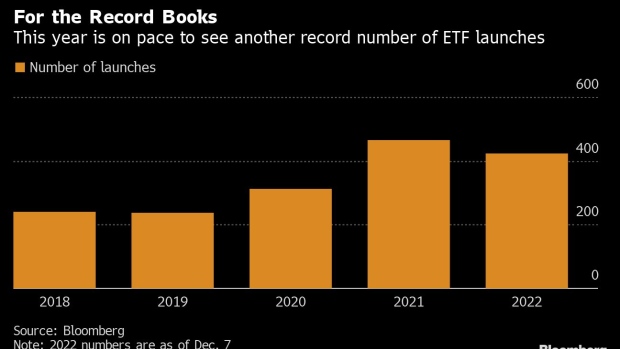 (Bloomberg) -- If a crushing bear market, inflation-fueled volatility and slump in inflows was meant to cool the booming US exchange-traded fund industry, issuers never got the message.

Firms have brought 422 new ETFs to the market this year as of Wednesday, five more than the number seen at the same time in 2021. That total puts 2022 on track to surpass last year’s record for debuts, even as the Federal Reserve’s battle against soaring prices stokes turmoil across asset classes.

Far from cooling the market, volatility has lent ETFs new momentum, according to Todd Rosenbluth, head of research at ETF data-provider and research consultant VettaFi. Investors are seeking cheap and easy ways to deploy their cash, while traders are harnessing the vehicles for diversification.

“The record inflows for ETFs in 2021 encouraged asset managers to expand their product pipeline in 2022 and then investors continuing to turn to ETFs during times of market volatility has caused that trend to persist,” Rosenbluth said in an interview.

Despite the explosive growth in ETF launches, there have been 139 closures this year versus just 72 in all of 2021, and inflows have dropped 40% from last year’s record.

Some once-hot areas of the market are already seeing a slowdown from earlier this year. Even before the collapse of the FTX exchange, the cryptocurrency ETF pipeline had been deflating, with launches dwindling to a trickle and a handful of ETPs shuttering. Some market-watchers are expecting a slew of closures in the coming months.

“We expect closures to pick up in 2023,” said James Seyffart, a Bloomberg Intelligence analyst. “We had record launches in 2021 and near-record launches in 2022 and many of these new funds still have minimal assets, which means they are prime candidates for closures as firms look to clean up and streamline their ETF offering lineup.”

However, even after all the closures, investors have added a net $588 billion to ETFs this year as they pulled $923 billion from mutual funds, according to ICI data compiled by Bloomberg Intelligence. Meanwhile, trading volumes for the year have already surpassed 2021’s record numbers.

“The ETF vehicle gives investors control, and then the variety gives them precision,” Bryon Lake, global head of ETF Solutions at JPMorgan Asset Management, said. “So, by having thousands of ETFs, you can put together the perfect group of those to achieve the portfolio that’s specific to you.”

ETF debuts this year included the advent of single-stock funds, which allow investors to make leveraged or inverse bets on the daily performance of individual companies like Tesla Inc., Microsoft Corp. and Coinbase Global Inc. Direxion, GraniteShares and others debuted such products. All told, more than 25 single-stock ETFs came to the market in 2022, though applications to launch such funds that target foreign companies have been withdrawn by a couple of issuers.

Other trends also remain as strong as ever — 36 of this year’s launches had ESG attributes, Bloomberg data show. Meanwhile, mutual fund-to-ETF conversions also accelerated in 2022, with Neuberger Berman planning to convert its only US commodity mutual fund into an ETF, following similar moves by JPMorgan, Harbor Capital Management, Guinness Atkinson and others. In the coming decade, more than $1 trillion worth of mutual fund assets could be converted into ETFs, according to an analysis by Bloomberg Intelligence.

The global ETF industry could reach $30 trillion by 2030, according to Lake. Launches will likely remain robust, with 2023 potentially being another record year, he added.

--With assistance from Katie Greifeld, Emily Graffeo and Isabelle Lee.