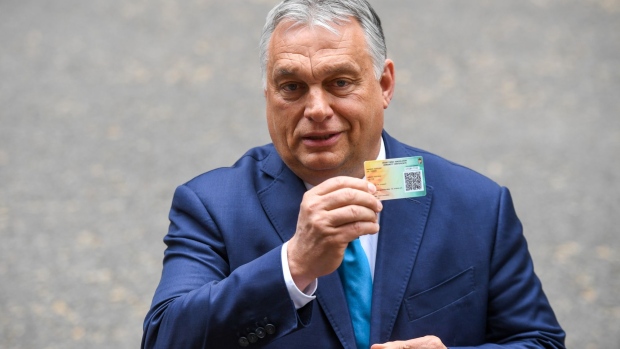 Viktor Orban, Hungary's prime minister, holds his Covid-19 vaccination card as he speaks to member of the media outside number 10 Downing Street, following his bilateral meeting with Boris Johnson, U.K. prime minister, in London, U.K., on Friday, May 28, 2021. Johnson's meeting with Orban, is one of the British leader's first in-person meetings with a European Union leader since Brexit and the coronavirus pandemic. Photographer: Chris J. Ratcliffe/Bloomberg , Bloomberg

Authorities will allow anyone to get the fourth shot at least four months after receiving the third one, he said in a state radio interview on Friday. A day earlier the government announced it would cut the quarantine time to seven days from 10 days as the omicron-variant fueled virus surges in the eastern European Union nation.