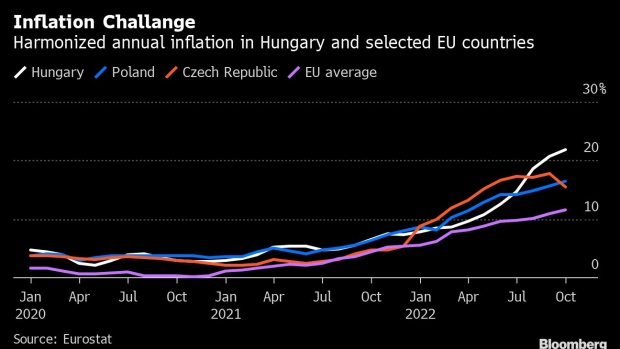 'Out of Use' signs on empty fuel pumps at a MOL Hungarian Oil & Gas Plc gas station in Budapest, Hungary, on Monday, Dec. 5, 2022. The country’s biggest oil company, Mol, is struggling to meet demand after its Danube Refinery reduced output for unplanned maintenance just as state price caps drove up fuel consumption. , Bloomberg

(Bloomberg) -- Hungarians braced for a surge in fuel costs and a jump in one of the European Union’s highest inflation rates after Prime Minister Viktor Orban’s fuel-price cap unraveled in the face of a nationwide gasoline shortage.

The cap that had set gasoline prices at 480 forint ($1.2) per liter, by far the cheapest in the EU, was lifted at 11 p.m. local time on Tuesday, Cabinet Minister Gergely Gulyas said at a late briefing in Budapest. He pinned the blame on EU sanctions on Russian oil for disrupting supplies.

The reversal came a day after central bank Governor Gyorgy Matolcsy warned lawmakers that Hungary was on the brink of an economic crisis — and possibly a prolonged period of stagflation — as various price controls collide with “the basic rules of the economy.”

Prices at the pump immediately jumped by as much as 46%, according to Mol Nyrt., the country’s biggest oil company. Orban had hailed the fuel cap as the result of his tough negotiation stance with the EU that exempted Hungary from the bloc’s ban on importing Russian oil.

But that measure, which took effect in the run-up to April’s election that returned Orban to office for a fifth term, became unsustainable. It buckled under a surge in demand, a drop in supply and maintenance work at Hungary’s only refinery, which recently cut domestic output almost in half.

Hungary’s inflation is already the EU’s third-highest and November data, due to be published on Thursday, is set to show a further increase to 22.1% from a year earlier, a Bloomberg survey of economists showed. According to government forecasts, price growth will peak at 25%.

Matolcsy said this week that far from slowing price growth, Orban’s regime of price caps added as much as 4 percentage points to headline data as goods whose prices weren’t regulated surged more to compensate companies for losses on other items.

Investors reacted by pricing out bets for a cut in the EU’s highest key interest rate over the next month. The forint weakened as much as 0.5% against the euro on Wednesday before erasing most losses to trade at 410.85 against the single currency at 9:47 a.m. in Budapest.

Yields on Hungary’s local-currency bonds advanced, with the 5-year note up 2 basis points to 9.39%. Bond prices have declined for six out of the last seven sessions as the European Commission recommended a delay in the disbursement of funds for Hungary due to concerns over corruption. EU members postponed a final decision on the penalties on Tuesday.

Pump stations in Hungary this week offered contrasting images: one with snaking lines of motorists hoping to get fuel in their tanks and many others that were cordoned off after running empty.

The situation became “chaotic” and prolonging it threatened energy security, Mol’s Chief Executive Officer Zsolt Hernadi said at the briefing where the cap was lifted. While “expensive” gasoline is not good, he said, “the only thing worse is when we don’t have it at all.”

Hungary must now “restore confidence” among oil importers, who shunned the country over the past year to avoid taking losses, Hernadi said. He said re-establishing “market stability,” including refilling reserves, would take as many as two months.

--With assistance from Marton Kasnyik.