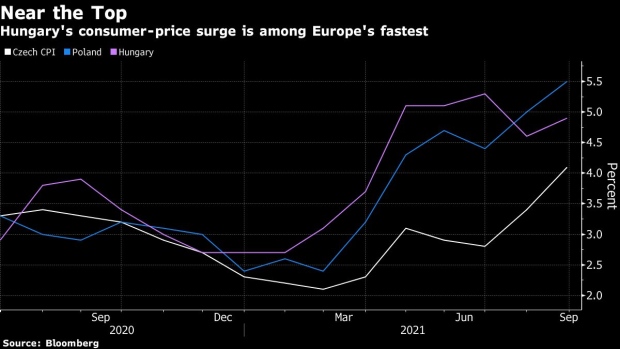 Customers queue outside a food store in the Grand Market hall in Budapest, Hungary, on Friday, May 22, 2020. While MKB Bank Zrt., a commercial bank overhauled under state supervision after the global financial crisis, and MTB Magyar Takarekszovetkezeti Bank Zrt., a recent assembly of savings cooperatives, have been in talks for some time about a merger, the virus pushed them to act now, MKB Chief Executive Officer Adam Balog said. Photographer: Akos Stiller/Bloomberg , Bloomberg

Hungary’s central bank chief labeled soaring inflation a “public enemy” -- despite overseeing a smaller-than-expected increase in interest rates to tackle it this week.

“Central banks must fight against inflation,” Governor Gyorgy Matolcsy told an economic conference Thursday in Budapest. “We’ve started that fight here in Hungary, but this isn’t a Hungary-only phenomenon. The quicker the rebound, the larger the inflation.”

That sentiment may sound odd to analysts who were wrong-footed by Tuesday’s announcement that rate hikes will now come in more modest increments. The policy tweak could safeguard the economy before a winter resurgence in Covid-19 but will be most welcome for Prime Minister Viktor Orban who faces re-election in 2022.