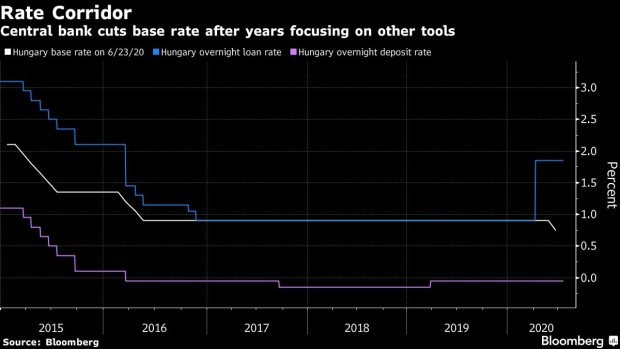 The central bank reduced the benchmark rate by 15 basis points to 0.6% on Tuesday, in line with the median estimate in a Bloomberg survey. Policy makers kept the overnight deposit rate at -0.05%.

After defying the global trend at the start of the coronavirus crisis by tightening monetary conditions, Hungary’s central bank is now catching up with its peers. Barnabas Virag, who took over as deputy governor in charge of monetary policy in May, oversaw a surprise cut in June and flagged a reduction to 0.6% this month, which he said would be the bottom.

The earlier policy tightening helped the forint recover from a record low, with the monetary authority turning to unconventional support measures to help the economy. The need to protect financial stability would preclude further cuts to the base rate, Virag said on June 26.

Virag’s clear guidance for this month’s decision, despite still-volatile financial markets, reflects a shift in steering investor expectations after years in which his predecessor kept decisions largely to himself and preferred other monetary easing steps.

Developments in the economy and markets have backed the central bank’s new tactics. Inflation remains at the 3% target and the forint has traded in a narrow range against the euro.