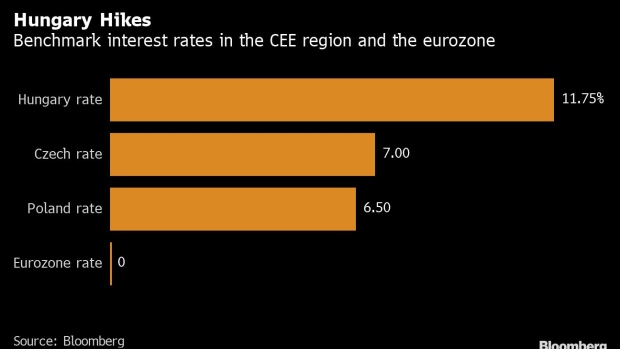 (Bloomberg) -- Hungary delivered another big interest rate increase and flagged further “decisive” increases, setting up a sharp contrast with regional peers who are moving to wrap up their monetary tightening campaigns. The forint surged.

The central bank raised the benchmark interest rate by a full percentage point to 11.75%, the highest key rate in the European Union. The move matched the median estimate in a Bloomberg survey.

The forint jumped 1.3% against the euro after the decision and a central bank statement, the biggest daily gain in almost a month. The move pared the forint’s decline to 10.3% since the start of Russia’s invasion of Ukraine in February, the third-biggest decline among emerging market currencies after the Turkish lira and the Argentine peso.

“The further rise in inflation and persistent inflation risks warrant the decisive continuation of the tightening cycle,” the central bank said in a post-decision statement.

The base interest rate may peak at around 14% by year’s end, and monetary easing could begin toward the end of the first half of 2023, David Nemeth, an economist at KBC Group NV’s K&H Bank in Budapest, said in an email.

The guidance in Hungary contrasts with statements from the central bank chiefs in the Czech Republic and Poland, who reiterated this week their plan to stop or slow rate hikes as an energy crisis spurred by the war in Ukraine is expected to stifle growth.

In Hungary, accelerating inflation and uncertainty over the disbursement of billions of euros in EU funds are forcing the central bank to continue its rate-hike cycle, Deputy Governor Barnabas Virag said at an online briefing. Developments in those two areas will be “key” in assessing the future rate path, he said.

The steps, which come on top of regular central bank foreign-currency swaps, are the latest effort by the central bank to shore up the currency, according to Peter Virovacz, an economist at ING Groep NV in Budapest.

“It has become clear that rates and foreign-currency swaps are not enough to give support to the forint, so the next step is to restrict liquidity in the banking system,” Virovacz said.

(Recasts with central bank statement and comments throughout.)