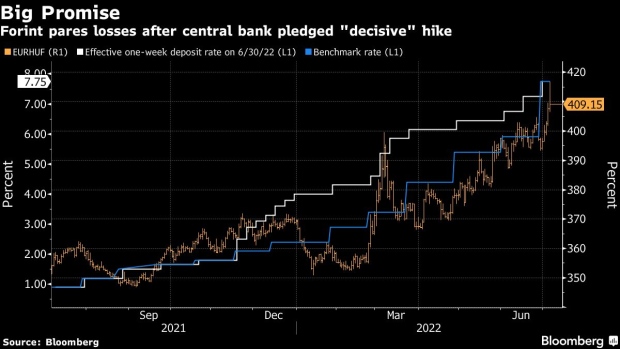 Policy makers increased the one-week deposit rate by 200 basis points on Thursday to 9.75%, by far the highest level in the European Union. The forint gained against the euro.

The forint had dropped more than 2% against the euro on Wednesday at one point as investors flee riskier assets amid growing concern that tighter monetary policy may tip parts of the world economy into a recession. That prompted central bank Deputy Governor Barnabas Virag to intervene, pledging a “decisive” rate hike to arrest months of relentless weakening that he said threatened price stability. The forint later pared its loss.

The forint has plunged almost 12% since Russia invaded Ukraine in February, the biggest drop among 23 emerging-market currencies tracked by Bloomberg. The yield on the 5-year government bond surged almost 100 basis points this week to 9.3%, the highest level in 10 years.

The turmoil pushed money markets to step up bets for monetary tightening in the next three months, according to forward rate agreements, which now show traders expecting the key interest rate to rise past 11% by early October.

Only last week, Hungary’s policy makers unexpectedly raised the base rate by 100 basis points to align it with the one-week rate. Frequent bouts of forint weakness had forced the central bank to tighten monetary policy on almost a weekly basis for much of this year.

The country is also grappling with the aftermath of election spending that deepened twin budget and balance of payments deficits at a time when the central bank’s foreign currency reserves trail those of peers in central and eastern Europe.

Prime Minister Viktor Orban’s continued stand-off with the EU over graft and rule of law concerns has also delayed the disbursement of as much as 37 billion euros ($37.8 billion) of the bloc’s funding. Investors have cited that as the reason for the bigger selloff in the forint compared with regional currencies.