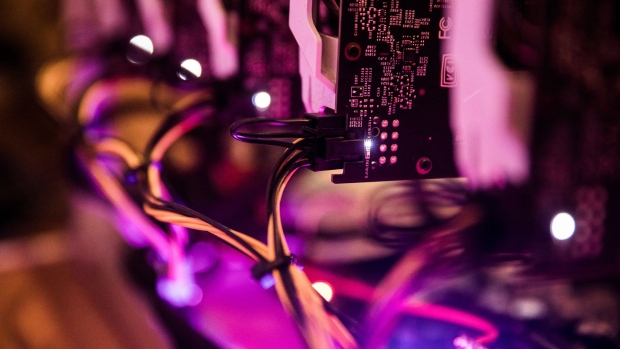 Nvidia Corp. GeForce GTX 1070 graphic processing units (GPU) sit stacked inside a 'mining rig' computer, used to mine the Ethereum cryptocurrency, in Budapest, Hungary, on Wednesday, Jan. 31, 2018. Cryptocurrencies are not living up to their comparisons with gold as a store of value, tumbling Monday as an equities sell-off in Asia extended the biggest rout in global stocks in two years. , Bloomberg

(Bloomberg) -- Hungary plans to slash the tax on cryptocurrency earnings by 50% from next year in an effort to encourage investors to declare income from trading digital tokens such as Bitcoin.

The government said it will lower the rate on such earnings to 15% from 30.5% starting in 2022, which would bring it in line with capital gains levies on stocks. The impetus appears to be fears among officials that investors are shielding crypto gains from authorities because of the higher tax rate.

Hungary’s Finance Minister Mihaly Varga said in a Facebook video on Tuesday that the government expects to collect “several billion forint,” or several million dollars, in additional tax revenue from the move. He also called it “a significant step” in increasing the visibility of the country’s cryptocurrency market.

Read more: Using Bitcoin to Buy a Tesla? Get Ready to Hear From the IRS

Governments around the world are grappling with how to regulate the ballooning market for digital assets, fueled by the meteoric rise of Bitcoin and other tokens. A top priority is ensuring that transactions are visible to authorities and that income is appropriately taxed.

While countries such as Canada have taken an aggressive approach in ferreting out cryptocurrency transactions, Hungary’s move is in line with its broader policy of cutting levies on personal and corporate income in order to widen the tax base and raise fiscal revenue.