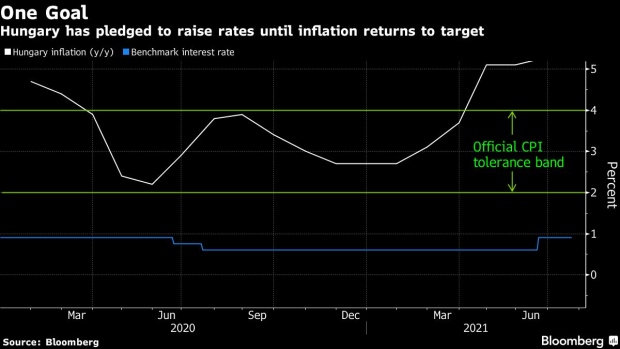 A tram travels past an empty restaurant terrace in Budapest, Hungary, on Tuesday, May 25, 2021. Hungary is moving closer to the European Union’s first major increase in interest rates this year, with policy makers poised to flag the start of a monetary-tightening cycle next month. Photographer: Akos Stiller/Bloomberg , Bloomberg

(Bloomberg) -- Hungary is set to deliver a second interest-rate increase in as many months to combat the European Union’s fastest inflation, though economists disagree on the size of the move.

The eastern European country and the nearby Czech Republic both tightened monetary policy in June as a rally in global commodities and the easing of lockdowns pushed consumer prices sharply higher.

The central bank has flagged a campaign of monthly hikes to drag inflation back down to the 3% target from more than 5% at present. The question on Tuesday is by how much after price growth overshot estimates last month.

Most analysts surveyed by Bloomberg predict the base rate, currently 0.9%, will be lifted by 15 basis points. But a sizable minority sees a 30 basis-point hike.

“Price growth will slow to not only within the tolerance band but to near the central bank’s goal next year as a result of proactive monetary policy,” Deputy Governor Barnabas Virag told the Portfolio.hu website last week. “We’re going to continue the cycle until we reach this.”

Hungary and the Czechs are breaking from the argument of the world’s biggest central banks that the current bout of inflation is a temporary phenomenon driven by base effects and supply-chain bottlenecks.

In Hungary’s case, however, the national currency is also a factor. The forint hit a record low in March and has been the region’s worst performer against the euro since the start of June.

Money-market investors see hikes in the coming months being on the more aggressive side. The three-month Budapest interbank rate -- a widely-used gauge for the prevailing interest rate in the economy -- is already 17 basis points higher than the central bank’s benchmark, with forward-rate agreements pointing to almost 60 basis points of increases by October.